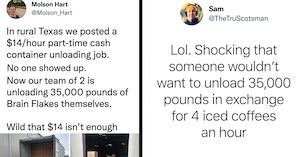 We’ve got yet another entry in the long saga of capitalists whining that “no one wants to work” instead of creating conditions that people would want to work in, this time from Viahart CEO Molson Hart. The toy mogul took to Twitter in order to whine that he didn’t get any responses to his job ad offering $14 an hour for back-breaking labor unloading 35,000 pounds of something called “Brain Flakes” into a warehouse.

He then admitted that due to his failure to hire anyone, he made two people unload all of that by themselves while somehow trying to foist the blame off of himself and onto all the people who don’t want to work for him.

“In rural Texas we posted a $14/hour part-time cash container unloading job,” Hart tweeted. “No one showed up.”

It’s not actually all that wild considering the fact that rent and just about every other cost of living has been spiking for years now, leaving the $15 minimum wage pushers to reconsider whether $15 is a living wage anywhere in the U.S. While rent may be lower in rural Texas than it is in New York, recent studies have found that $15 per hour at 40 hours per week is not enough to support a family in a modest apartment in any area of the nation, let alone $14 per hour part-time.

What is wild is how much rent has gone up in such a short time and how clueless the rich remain about how the vast majority of Americans live in the year 2021. Hart in particular is the same person who tweeted that he knows a guy who makes over $1.1 million annually and tried to use his ridiculously extravagant budget to claim that this person isn’t really rich.

And, because we know you’re wondering, these are brain flakes.

If Hart had any brain flakes to spare, he might take this as an opportunity to gather some basic business advice, but instead, he tried to brag about how he forced two people to do back-breaking labor at top speed for four hours straight because he failed to hire help.

A lot of people are simply joking about the phrase “Brain Flakes,” causing it to trend on Twitter because it’s just objectively funny, plenty of others are attempting once again to explain to the clueless rich guy of the day that his hiring failures are his own fault. How anyone manages to convince themselves that other people are somehow bad and wrong for refusing a bad deal remains a mystery to people who are not like Molson Hart.