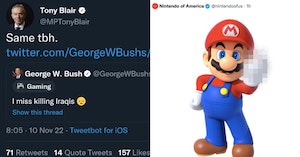 As Elon Musk employs the business strategy of throwing spaghetti at the wall to see what sticks following his purchase of Twitter, users are not making it easy on him. Impersonator accounts, either by serious scammers or just people looking to troll Musk, have proliferated on the platform now that anyone can purchase a blue check mark to make themselves look official.

From politicians to brands to celebrities to accounts impersonating Twitter itself, these fakers are making Musk look worse by the hour while advertisers flee the platform. One popular user, Joshua Hill, is now making a thread documenting many of these accounts and showing just how huge — and hilarious — the problem is becoming.

This website now has blue check accounts impersonating political figures like former U.S. president George W. Bush, tweeting out things like “I miss killing Iraqis.” Another account posing as former British Prime Minister Tony Blair soon agreed with this sentiment, and one impersonating President Joe Biden is out there posting some rather sexually explicit content.

There’s also a fake Ben Shapiro account making things up about Matt Walsh, and a fake Rudy Giuliani talking about Nancy Pelosi’s “thangs thangin.” Plus, there are now multiple accounts impersonating the Pope.

Brands on Twitter cannot be enjoying this new development. It’s unlikely that Nintendo is happy about the idea of their ads popping up alongside tweets from their impersonator posting images of Mario giving you the middle finger. Meanwhile, a fake American Girl account is out there tweeting that “Felicity owned slaves.”

It’s all fun and games until you get accounts running phishing scams by impersonating companies like Twitter itself, such as the one that quickly gained over 26,000 followers and began posting calls for NFT and crypto bros to “authenticate” their accounts for free blue checks.

That account has now been suspended, as Musk promised that any such account not clearly labeled as a parody would be without warning, but not before tens of thousands of people followed it and who knows how many fell for the scam.

Back to the funny, possibly the best example to be found in this thread is the one that posed as Elon Musk to announce a very special new feature, Twitter Gold, available to one person in particular.

“Starting today we’ll begin offering Twitter Gold: a free subscription that gets you yearly family vacations and nightly dinners with me,” the tweet from the fake account reads. “If your name is Grimes. Please come back. I love you.”

Musk seems to be flailing to figure out a fix to all the problems he created by obliterating a verification system that was working pretty okay before he took over. On Wednesday, he implemented an additional badge with a gray check and the word “official” to go under the display names of verified public figures and companies, then three hours later, posted that he had “killed it.”

The new badges disappeared, and now you have to click through to people’s account to see if they have a blue check because they’re verified to be who they say they are or if they simply humiliated themselves by giving an insufferable billionaire $8 that month. Of course, seeing as this new system was never actually announced by Musk or Twitter, it appears that it’s not doing much to stop people from fooling users with impersonator accounts.

On top of that, Twitter has now lost its CISO, chief privacy officer, and chief compliance officer after they all resigned, resulting in the FTC putting out a warning to Musk because Twitter is under a consent decree.

“We are tracking recent developments at Twitter with deep concern,” says the FTC statement. “No CEO or company is above the law, and companies must follow our consent decrees.”

So much for the theory that billionaires earn their wealth by being good at what they claim to do.