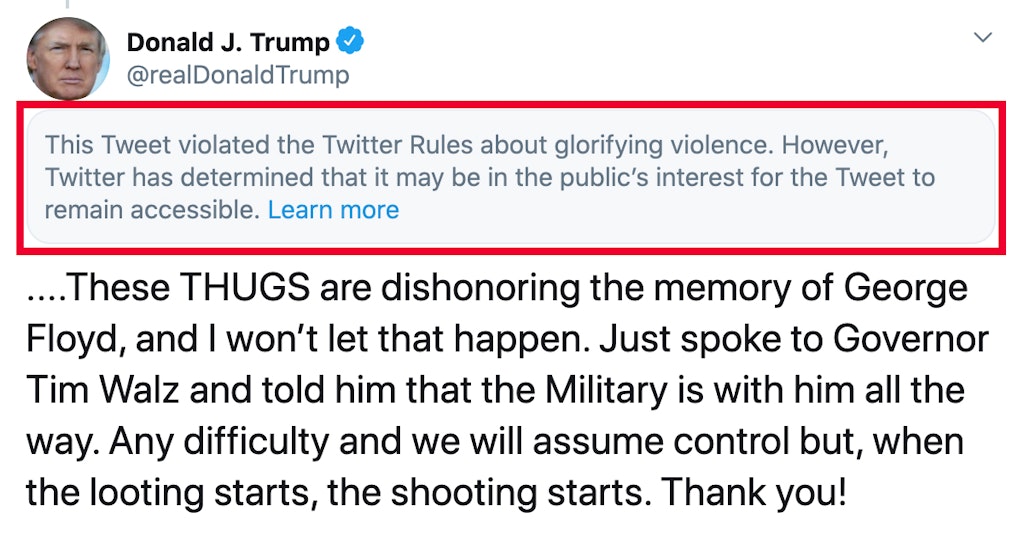 Twitter has finally taken some minimal action against Donald Trump’s incendiary tweets that promote and encourage violence, affixing a “public interest notice” to missives form both his account and an identical one from the official White House account, CNN reports. The tweets referred to the protests taking place in Minneapolis over the murder of George Floyd by the police officer Derek Chauvin, who kneeled on Floyd’s neck for many minutes as he begged for air.

On Thursday night, a police precinct was taken over by protestors and set on fire. This was following a long day of rebellions across the city, including looting at Target. Obviously, Trump is more concerned with looting than the murder of black people by the police. He tweeted plans to send out the National Guard, and used the phrase “when the looting starts, the shooting starts.”

However, they decided to leave the tweets up, saying it “may be in the public’s interest for the tweet to remain accessible.” 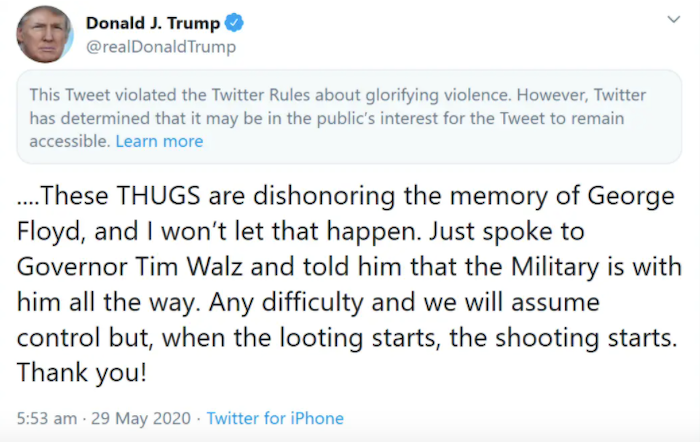 This decision by Twitter is the second time the social media platform has engaged with Trump’s tweets, putting a fact check label on his insistence that mail-in ballots with lead to widespread voter fraud. This is not true. Trump was very unhappy about that, and he’s very unhappy about having a warning label placed on his current tweets, as these new ones show:

Twitter is doing nothing about all of the lies & propaganda being put out by China or the Radical Left Democrat Party. They have targeted Republicans, Conservatives & the President of the United States. Section 230 should be revoked by Congress. Until then, it will be regulated!

“The President has been targeted by Twitter.” @MariaBartiromo What about all of the lies and fraudulent statements made by Adam Schiff, and so many others, on the Russian Witch Hunt Plus, Plus, Plus? What about China’s propaganda? WHO’s mistakes? No flags? @foxandfriends

The phrase “when the looting starts, the shooting starts” was first notably used by Miami’s police chief, Walter Headley, in 1967, according to NBC News. Headley has been condemned by many historians as a violent racist, who incited the riots in Miami during his tenure. The phrase was intended as a warning that looting would lead to the murder of citizens by the state, and he specifically said that officers were targeting “young hoodlums, from 15 to 21, who have taken advantage of the civil rights campaign. … We don’t mind being accused of police brutality.”

This tradition of the police force escalating violence can be seen in Minneapolis. Protests began peacefully, but soon officers were firing tear gas into crowds, shooting people in the heads with rubber bullets and setting off flash grenades.

The alternative to this violence seems to be arresting Derek Chauvin and holding him accountable for his crimes, something the police have failed to do.