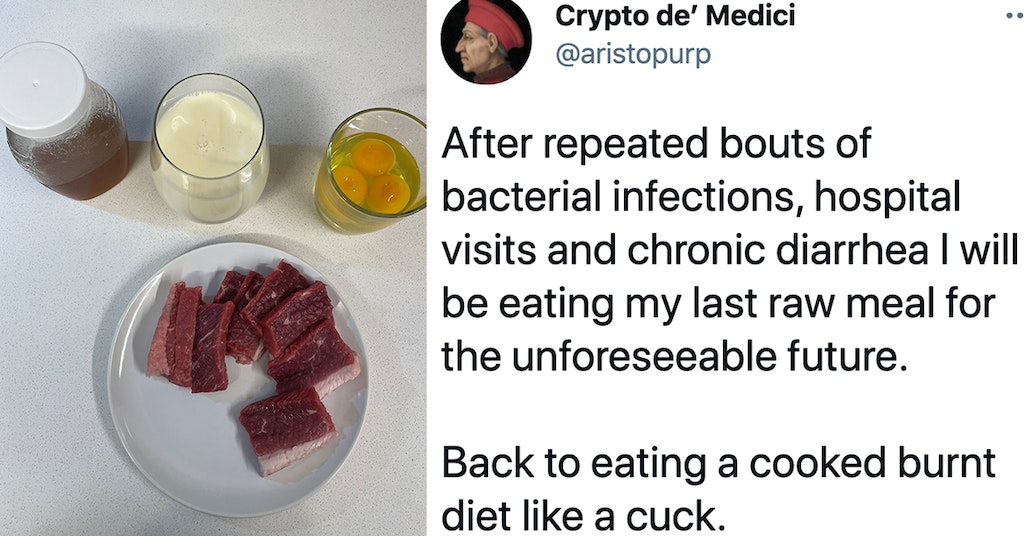 
There are so many bizarre takes on Twitter that sometimes it’s impossible to tell a bit from someone being unfortunately serious about something ridiculous.

That’s the head-scratching position many are left in after an account by the name @aristopurp tweeted out their lamentations about having to switch back to eating meat that’s been cooked instead of downing it raw.

Yes, you read that right.

“After repeated bouts of bacterial infections, hospital visits and chronic diarrhea I will be eating my last raw meal for the unforseeable future,” @aristopurp wrote, alongside a photo of what looks to be raw beef arranged unappetizingly on a plate. “Back to eating a cooked burnt diet like a cuck.”

If this is a bit, he’s been making a run at it for months now, chastising others for a willingness to “blindly accept McDonald’s” while holding higher standards for raw meat and suggesting there is some sort of greater conspiracy to keep humanity weak by making raw foods hard to access.

Unfortunately, the simpler answer is just this guy really believes that “the booked burnt diet paradigm truly is for cucks” and has some odd affinity for “Twitter seeing [him] as the raw meat guy.”

And sure, Twitter does see him as that. But it may not mean exactly what he thinks he does.

Apparently, at the end of the whole thing, @aristopurp first decided he would find a way to continue the raw meat diet, and then claimed the whole thing was an April Fools joke—and that he would never give up eating raw meat.

Regardless, there’s no good end to this story.