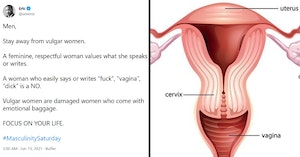 A popular Twitter user who supposedly offers advice on the subject of “Men’s Health & Lifestyle Medicine” was widely criticized for warning men to avoid women he considers “vulgar,” including women who use bad language, including examples such as the f-word, “d-ck,” and “vagina.” There is plenty about the tweet to take issue with, but “Eric” got particular attention for including the clinical term for that particular sexual organ on his list of “vulgar” terms.

“Stay away from vulgar women,” wrote Eric. “A feminine, respectful woman values what she speaks or writes. A woman who easily says or writes ‘f—‘, ‘vagina’, ‘d-ck’ is a NO.”

“Vulgar women are damaged women who come with emotional baggage,” he concluded. “FOCUS ON YOUR LIFE.”

None of that is true, of course, as there is absolutely no connection between having “emotional baggage” and the use of certain words considered by some to be bad. As for “vagina,” as many pointed out to Eric, that term tends to show up more often in sexual education classes than in the mouths of people who are actively attempting to be vulgar, as there are many other words for that organ that are considered to be dirty swear words.

A lot of people initially wondered if the tweet was a joke, but a look at the things Eric tweets on a daily basis reveals that he’s really just a misogynist trying to pass himself off as a health and relationships expert. Previous tweets have warned men against being friends with any women they might want to date, actually using the term “friend zone,” has said that women expect all men to “protect” and “provide,” and says that ladies are just passengers on men’s buses.

He has also said that the qualities in women that attract men include “submission” and “sexual purity.”

There are plenty of accounts like this on Twitter run by men who gain followers by repackaging the misogyny and toxic masculinity of conservative Christianity as simple life advice and fatphobia and “do some squats and eat organic” as useful health advice. Eric has gained over 338,000 followers this way, but so much attention also increases the chances of him being ratio’d for incredibly ignorant tweets calling terms used by actual medical experts “vulgar.”

Women who work in gynecology and similar fields in particular had some questions.