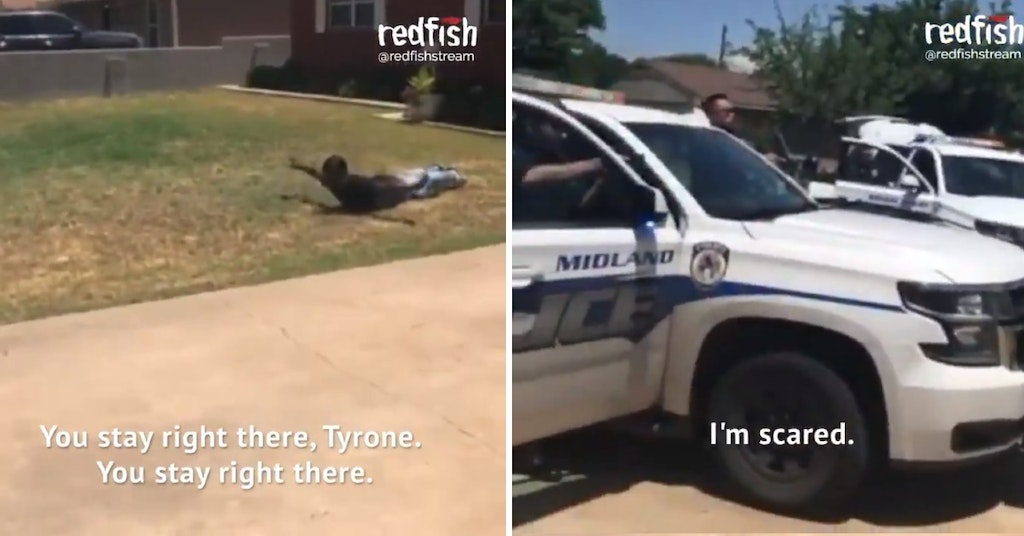 In yet another case of alarming police brutality, a video shows multiple Texas cops pointing their guns at a clearly terrified young Black man lying face down on the ground for an extremely tense period of time before they finally move in to arrest him. In the end, the man’s 90-year-old grandmother can be seen standing next to him on the front lawn as two officers detain him.

Terrifying moments for a young Black man and his family in Texas, as numerous cops point guns on him and then assault his 90-year-old grandmother.

His alleged offense: rolling through a stop sign. ⁠ pic.twitter.com/WdxwFeX1y0

The local press reports that the young man is Tye Anders and was charged with evading arrest because he drove to his home after being signaled to stop by an officer rather than pulling over immediately. It is very possible that Anders was afraid for his life following many years of police brutality against Black men and the recent high-profile killing of George Floyd.

He certainly seems afraid in the video, saying “I’m scared” over and over while lying face down on the grass. The five officers who were on the scene were ordering Anders to get up from the ground but he was too afraid of being shot to do so, according to the woman taking the video.

During the nearly two minutes of video in which cops stand pointing their guns at the unarmed man on the ground, bystanders and family members can be heard begging them to lower their firearms and call in a Black officer.

“We’re Black, they shoot Black people,” the woman taking the video screams. “He’s not getting the f*** up!”

Once Anders’ grandma falls over, everything devolves into chaos before the video ends.

Anders’ attorney has denied the allegations that he violated any traffic laws and accused the police of racial profiling.

“Racial profiling and pretext stops have been at pandemic levels in this country for generations,” said Justin Moore. “This incident falls within this age-old trend of following black men and arresting them for fabricated reasons.”

Moore also said that Anders has been harassed by police in the past and filed a complaint against local officers.

On Twitter, people have even less patience for this kind of scene than usual.

i dare another white person to ask me to explain to them why all cops are bad. the system is morally unjust and reprehensible. tired of feeling scared and nauseous every waking minute https://t.co/Xm4bMjrXg9

I can’t even function today. https://t.co/Tg6pACNQPg

Watch it. Share it. You can feel their fear and frustration. These stories need to be worldwide news where is the coverage? https://t.co/XVR2jsaJtl

This is ridiculous! It has to stop! The things I have had to do & put up with in my life to make sure I come off as “less threatening” make me sick, and there were STILL times where it wasn’t enough, and I know there will be more. The has to be change! #BlackLivesMatter https://t.co/s6L6s9ciDq