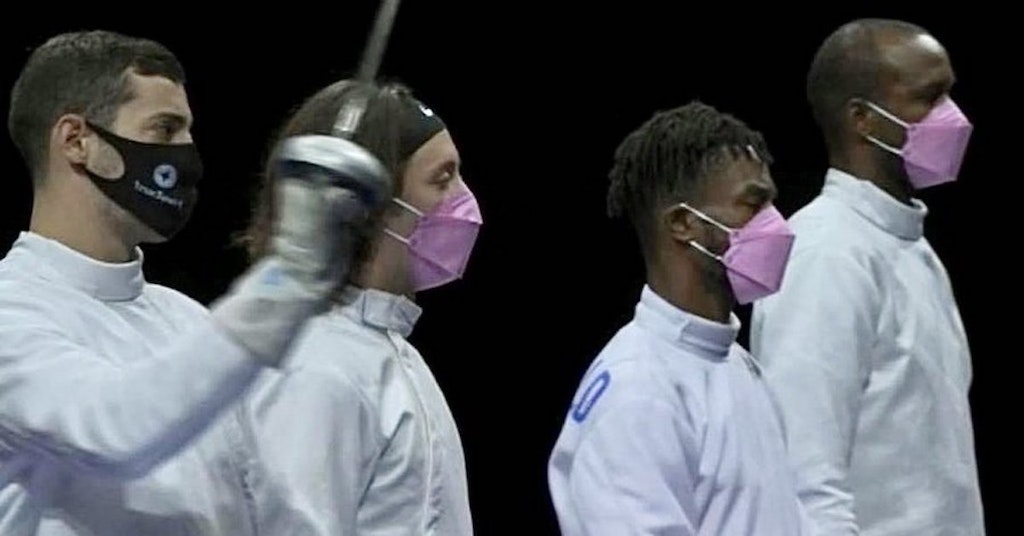 The U.S. Olympic team is embroiled in controversy this year, as the men’s team includes alternate Alen Hadzic, who Buzzfeed News reports is under investigation for three allegations of sexual assault.

The decision to include him on the team has baffled and horrified the fencing community, and six women fencers urged the International Olympic Committee in May to exclude him.

“We are gravely concerned about the impact Mr. Hadzic’s potential presence will have on other Team USA athletes,” they wrote.

On Friday, the men’s team fought in their opening match against Japan at the Tokyo Olympics, with Hadzic there. In protest, three men on the épée team, Jake Hoyle, Curtis McDowald, and Yeisser Ramirez, wore pink masks while Hadzic wore a black one.

“The disdain was clear,” a source told BuzzFeed News.

“They decided to make a statement that they were not standing for him being there,” said another anonymous fencer. “They wanted to make a distinction between themselves that they didn’t stand for sexual assault or abuse against women. These athletes wanted to have a voice where US Fencing and SafeSport failed.”

Hadzic was originally suspended by the US Center for SafeSport, the nonprofit agency responsible for protecting athletes from abuse, but an arbitration process allowed Hadzic to lift the ruling.

There was a “safety plan” implemented by USA Fencing to keep Hadzic separate from women and out of the Olympic Village, which sounds pretty horrible. He was also forbidden from fencing with women teammates.

Unsurprisingly, Hadzic has denied all the accusations. As the alternate, he did not fight on Friday. The team lost to Japan and placed ninth. This situation can’t be good for their game.