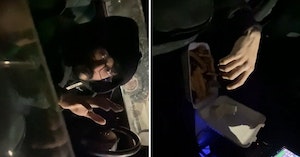 A video on Twitter is causing some debate for showing a man approaching an Uber Eats driver vehicle and accusing the working of eating part of his order while sitting in the car, which could not have been far from where he lived considering the fact that the customer was able to walk to him. The customer filmed the interaction as he yelled at the driver, claiming that the wings the worker was eating belonged to him and were part of his order which was not delivered with the rest of his food.

It’s difficult to understand what the driver is saying in response due to gusting wind. It’s possible that he ordered his own wings to eat on the job or got them in some other fashion, as he doesn’t seem shy about showing the customer the food he’s eating, nor does he appear contrite. However, other workers for food delivery apps have been accused of this kind of theft, leading people to wonder what really happens when part of their order is missing.

After walking up to the driver’s car, the customer immediately issues his accusation.

The driver initially seems to deny this, but the customer presses him.

“You got that from Bruno’s, the wings, or the ribs.”

The driver points to his phone screen and says something that’s obscured by the wind. Later, however, it seems as though the worker confesses to eating his food, possibly claiming that the box or something “fell,” maybe suggesting that it became unfit to deliver to a customer, so he was eating it himself to avoid wasting it. The customer then says he should have reported this to Uber and claims that the company no longer reimburses people for food that is not delivered to them.

If this is true, it’s a wonder why anyone orders from Uber Eats anymore.

“They’re not gonna give me my money back,” he says. “They don’t do that s–t anymore. I know how Uber works. Now, when the food gets stolen, they charge you the full price.”

According to the Uber website, customers are reimbursed the full price of any missing item from an order, or, if the full order is wrong or missing, they refund the full price of the order including the delivery fee. It’s unclear why this customer believes he won’t be refunded for the alleged missing food, even if the driver failed to report that part of the order had been dropped.

The video ends in the middle of the customer repeatedly accusing the driver of theft and it’s unclear if or how the issue was resolved. A new debate over the possible moral and hygienic implications of this behavior has erupted in the comments, with some complaining that this kind of theft can hurt disabled or elderly customers and others saying that you get what you get with a company that treats its workers so poorly.

At the end of the day, it would be great if people who need food delivered had a better option than a company that pays its workers almost nothing.