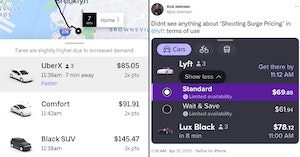 Rideshare apps Uber and Lyft have been accused of severely increasing the prices for rides shortly following a mass shooting on the New York subway system that left at least 13 people injured and many more fleeing in terror. Screenshots from people’s phones showing fares as high as $145 to get away from the area of the shooting have been going around Twitter as people express outrage over the grimmest bit of price gouging seen since the beginning of the COVID-19 pandemic.

“@Uber turn off surges in sunset park,” wrote one local woman. “People are scared, let them get out safely.”

Both Uber and Lyft use an automatic system that detects areas of high demand and implements “surge” pricing, increasing the prices of their services based on how many people in the area are requesting them. You can see how this could at times create horrifying dystopian nightmare situations, and yet both companies continue to rely on it.

Others shared fares for short distances in the city near the subway that were even higher. One woman shared a screenshot with fares demanding $85, $91, and finally $145.47 for a trip out of Brooklyn, with a warning message claiming that prices were “slightly higher due to increased demand.” She reportedly only needed to get to Manhattan for a doctor’s appointment, and certainly couldn’t take the subway after police shut it down.

Most of the accusations of fare surges right after a mass shooting appear to be leveled at Uber, which responded after the New York Post contacted them for comment.

“Following the incident, Uber disabled surge pricing in the vicinity and capped pricing citywide,” claimed company spokeswoman Freddi Goldstein. “If anyone on our platform experienced unintended charges during this emergency, we will work to get them refunded.”

It may be the case that Uber didn’t hear about the shooting in time to disable this pricing program before people desperately needed to get away from a specific area of New York, but this only exposes the inherent problem with the system. Automatic price gouging that sometimes makes you look bad is still price gouging, and we can only hope that everyone got to the doctor on time. It’s hard enough just to get an appointment right now.

Lyft has also been accused of this same problem, with one Twitter user sharing a screenshot of fares as high as $78.12. They have been responding to complaints on the social media platform with a statement also claiming to have suspended “prime-time pricing” in the area and that they will work to refund those who paid inflated fares, though whether that’s true remains to be seen.

Both companies have long been accused of extremely shady business practices that essentially rely on breaking labor laws to deeply exploit their workers, hoping to get the laws changed in their favor later. Somehow, this strategy has been widely effective even as their prices have increased to rival cab companies, which at least classify their drivers as actual employees.

Their reliance on automated systems rather than real people they would have to pay has also caused numerous problems, but little has changed. Even with the outrage being expressed on line following the subway shooting, it’s unlikely that the problem will be fixed before the next mass shooting in the U.S.