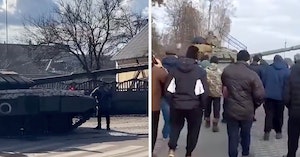 Multiple videos allegedly of Ukrainians on foot bringing Russian tanks to a halt have been circulating online in recent days, adding to the vivid picture of the atrocities that are happening in that part of the world right now.

One video, allegedly taken in Koryukivka, suggests that citizens came out in droves to block a Russian tank from entering their city. The short clip shows the road filled with people on foot, doing nothing more than walking towards the idling tank. There are so many people that there’s no way the vehicle could simply go around them — and the clip ends before we see what the ultimate outcome is.

Other videos tell similar stories, claiming to show the Ukrainian people casually blocking tanks, or in some cases, interacting with them and trying to force them to go back where they came from.

Videos and photos shared across social media — while subject to scrutiny, considering many are unverified — have been used to communicate what’s really going on on the ground in Ukraine, and that its citizens aren’t simply going to lay down and let Russia invade without fighting back.

And these images have sparked strong reactions from those watching from a distance.

It seems likely we will see more and more videos like this as the Ukrainian resistance to the Russian invasion of their land continues.