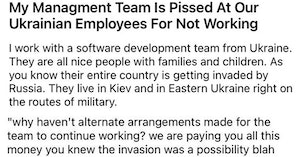 A reddit post is reminding people of the extraordinary greed and self-centeredness capitalism can cause, even in the face of destruction.

A user claiming to work with a software development team from Ukraine made a post to the r/WorkersStrikeBack forum last week noting that his company had had a hard time getting ahold of the workers, what with the country being invaded by Russia and all.

“We had another emergency meeting this morning,” he wrote. “We were able to finally get in contact with the project manager. I was going to ask him the status of our people if everybody is ok but my manager just gets pissy and goes, ‘Why haven’t alternate arrangements [been] made for the team to continue working? We are paying you all this money, you knew the invasion was a possibility blah blah blah.’”

The Redditor reports that the project manager from Ukraine was stunned and had to explain that the entire country wasn’t safe. “I found [out] later the guy’s house had been destroyed and he was doing a meeting in his uncle’s house in some village,” the Redditor wrote, “but these assholes at the top can only think about their bottom line profits.”

There’s certainly debate as to whether this is real or not, if only because it sounds so on-the-nose dystopian, but others who have experienced management demanding work despite a crisis felt it at least could be real.

If it is real, it’s a bleak reminder of how we’ve managed to build a world where money is too often more valuable than people.

And even if it’s not real, there is without a doubt some company out there where this conversation really happened. Capitalism can’t do anything but create an environment where this goes on.