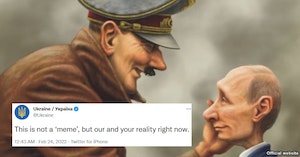 The official Twitter account for the nation of Ukraine posted an image on Wednesday not long before Russian forces crossed the border into their country that took the world by surprise, considering the source and the seriousness of the situation. The image is a caricature of Adolf Hitler in his fancy Nazi hat smiling and bending down to tenderly stroke the face of a child-sized Vladimir Putin, who smiles back up at Hitler with eyes full of affection.

Many have called this image a “meme,” but a follow-up tweet by the Ukrainian account pushed back on this idea.

“This is not a ‘meme’, but our and your reality right now.”

The comparison between Hitler and Putin, or at least the suggestion that Putin is a big fan and considers Hitler to be an inspiration, hit well with those siding with Ukraine as all-out war breaks out between the nations. Many had already compared Putin’s actions, using flimsy pretexts to invade portions of Ukraine over time after repeatedly promising the world he wouldn’t, to Hitler’s invasions of European countries leading up to World War II.

The image is also interesting due to the fact that Putin has repeatedly claimed that it’s Ukraine who are the Nazis. As part of his justification for escalating into a full-scale invasion of the country, Putin claimed that they were committing genocide against Russian-speaking persons within their borders, claiming that his goal with the attack was the “demilitarization and de-Nazification of Ukraine.”

There has been no evidence presented of a genocide campaign in Ukraine, and although the nation does contain some neo-Nazis, so does Russia, most if not all of Europe, and the U.S.

The tweet is now fast approaching one million likes and has gained hundreds of thousands of retweets. Much of this was not only due to people agreeing with the sentiment, but based on a feeling of dizzying bafflement that we now live in a world where a nation facing a massive military invasion that is stoking fears of a third World War is responding with memes and what is known as “s–tposting.”

The same account has been encouraging people to tweet at the Russian Twitter account to call for them to halt all aggression against Ukraine and is asking Twitter itself to ban the Russian account considering the violence they’re inflicting on the neighboring nation. They are also encouraging everyone to be wary of misinformation and to make sure that anything they’re posting on the topic has been verified by a credible source.

Meanwhile, people around the world remain hung up on the idea that funny Twitter posts will very likely end up in future history books to be studied by our own children. Many others are very offended by the idea that this was called a “meme,” pointing out the long history of political cartoons throughout the world that have very much included the topic of war.