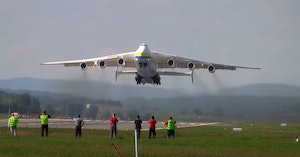 Ukraine Is Transporting Personal Protective Equipment To The United States

Ukraine was prominent in the minds of Americans prior to the coronavirus outbreak. After the whistleblower came forward with the news that President Trump had threatened to withhold aid from Ukraine unless they announced an investigation on former Vice President Joe Biden, we were treated to several months of hearing about Ukraine as the impeachment inquiry continued on.

One of the things we learned during witness testimonies about that phone call was that Trump had claimed Ukraine is full of “terrible people” who “tried to take [him] down.”

“It was clear to me that…President Trump had a deeply rooted negative view on Ukraine rooted in the past,” said the former special envoy to Ukraine, Kurt Volker.

But now, Ukraine is doing for the U.S. what many say Trump is failing to do.

That is, they’re providing the United States with personal protective equipment (PPE) brought over from Asia, including much-needed masks and disinfectant for hospital workers.

According to BuzzFeed, Antonov Airlines, which is a Ukrainian state-run airline, has eleven flights planned between Asia and the United States over the next month to transport supplies.

Antonov Airlines is in a unique position to handle this challenge.

They’re staying mum on the cost of the flights or how they were paid for, but apparently utilizing the Mriya can cost around $30,000 per hour.

These aircraft have already been transporting supplies to a variety of other countries.

Canada, the Czech Republic, Ireland, and Qatar are among those on a long list of countries that have used Antonov’s services during the outbreak.

“This April, according to our estimates, is a record month in terms of the flight time,” said Antonov’s deputy director, Vitaliy Shost. “This is fantastic, but it’s not done magically. Our relatively small team works really hard to arrange all the flights and requests.”

It can’t be an easy task right now, but Shost says all cargo handled according to “quarantine instructions,” ensuring the equipment is safe and properly prepared for the hospitals that desperately need it.

These supply trips to the U.S. come as the federal government is being criticized for blocking states’ access to PPE.

The federal government has reportedly outbid states for PPE, insisted that the federal supply isn’t for the states, and even confiscated expensive purchases made by the states themselves.

Basically, governors are doing everything they can to get the medical equipment needed to protect their residents, while the federal government not only fails to help, but actively stands in the way.

Hopefully the shipments brought to us by Ukrainian planes will help supplies end up where they’re actually needed — with American healthcare workers throughout every state in the country.

So, remind us — who are the terrible people in this scenario, Trump?