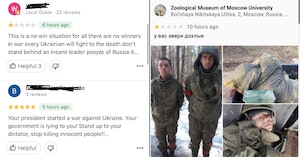 As the Russian invasion of Ukraine continues, the people who just happen to be living in Russia, many of whom are adamantly against the assault, have been having a hard time getting any reliable or accurate information about what’s happening. As the war began to not go entirely as Vladimir Putin expected, he began to block or limit access to any online news sources that are not state-controlled media that’s rife with propaganda and downright lies, claiming that it’s foreign media that’s lying about what’s happening in Ukraine. He even blocked social media sites like Facebook and Twitter.

But the internet is vast. To get around this information embargo, people have started to upload photos and information about what’s happening in the invaded nation, including photos of captured Russian soldiers, bombed-out buildings, and news clips, to Google Maps. Users have taken to posting reviews of popular spots in major Russian cities, adding the photos or simply urging ordinary Russians to speak out against the war and soldiers to turn around and go home.

There have been numerous reports that Russians soldiers have been misinformed about their missions into Ukraine, with some claiming they had no idea they were going to war or that they would be fighting their own neighbors. Their families, similarly, were reportedly not informed that their loved ones were becoming part of an invading force against a sovereign nation as Putin kept a tight hold on what his people were allowed to know.

According to The Guardian, one family was utterly shocked when they saw Leonid Paktishev, a commander of a Russian sniper unit and family member, injured and identifying himself in a video posted to Telegram after he was captured by Ukrainian forces.

Google Maps has already had to disable or limit some features in and around Ukraine in order to hide information about busy traffic areas that could have been used by Russian forces, though it’s unclear if any restrictions have been imposed similarly on Russia. Regardless, nothing Google could do at this point other than shutting down the whole operation could stop people from posting information on Maps, and then the trend quickly spread to Google Reviews, where people are working to counter Russian propaganda.

“Your government is lying to you about conflict in Ukraine,” wrote one user. “It’s not a rescue operation, there are no nazis there! It’s a war started by Putin against a whole nation, against children, women and men.”

Many of the reviews were soon deleted, but they may not be able to deleted as fast as people are leaving reviews. One person even reportedly used a question-and-answer feature on Google Reviews to actively answer questions Russian citizens had about what’s happening in Ukraine.

“5,800 Russian Soldiers died today, 4,500 yesterday,” another review reads. “Stop your aggression, don’t let your kids suffer, if you go to war you will not come back.”