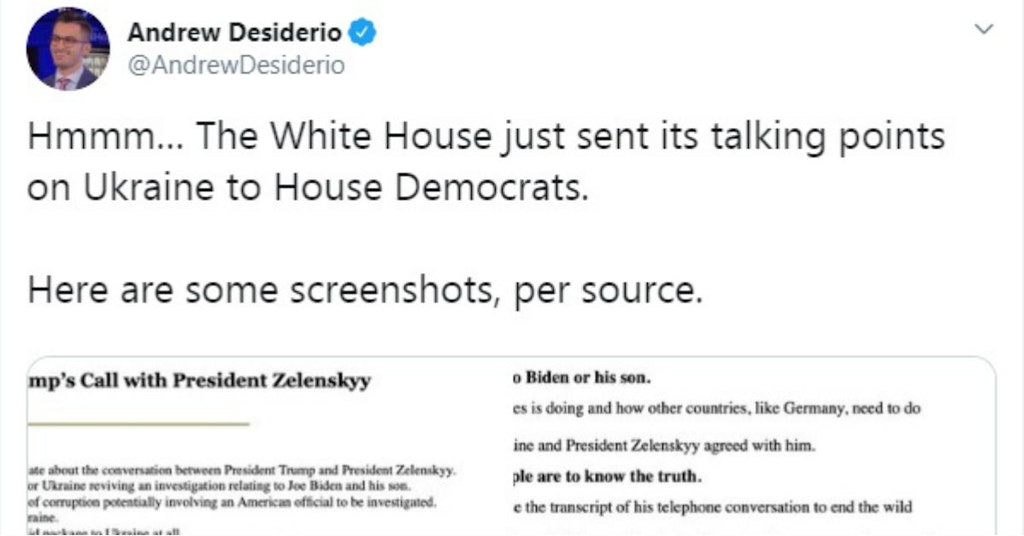 
Have you ever accidentally hit “reply all” on an in-office email? Or instead of attaching an invoice, accidentally attached a photo of your dog’s rectum that was meant for the vet? This is kind of like that, only it was Trump’s White House accidentally emailing a list of their talking points for Republicans about the President’s call and possible bribery of Ukraine officials to House Democrats.

So kind of a mix between “reply all,” wrong attachment, and showing your entire hand to the table at a high-stakes poker game, with some light treason sprinkled on top. Allegedly.

Here are some screenshots, per source. pic.twitter.com/VvNAaqKP3D

According to a source who contacted Politico‘s Andrew Desiderio, this “What You Need To Know” document on the Ukraine call was not meant to be sent to House Democrats and the White House sent a follow-up email attempting to “recall” the original.

This morning, the White House published a condensed memo on the call after promising to release the transcript and the Senate voted Tuesday to approve a non-binding resolution demanding the release of the whistleblower complaint. Among all of this, of course, Nancy Pelosi announced that an official impeachment inquiry was launching, so the White House is in full scramble mode.

The story of the accidentally-emailed talking points and “recall” request have been backed up by HuffPost.

Here's a screenshot of the White House asking House Democrats to please disregard the talking points on Trump/Ukraine they just emailed them pic.twitter.com/55HgOESWyL

Thanks to this, it’s quite easy to point out inconsistencies and falsehoods in said talking points, as Twitter has been doing all day long.

These talking points are contradictory: “POUTS never mentioned aid to Ukraine”/”POUTS only mentioned assistance because…”

And they went out to the Democrats. https://t.co/OdUHABaOm7

Today I learned that the White House can’t spell the name of the Ukrainian president.

I may be missing something, but the talking points include a mention of the “Deep State,” which – correct me if I’m wrong – is a clownshit conspiracy theory formed in the seedy crevices of the far right internet.

The Republicans are swimming in garbage.

These are bad talking points. Not sure how anyone thought “the real scandal is the whistleblower” was a good idea.

They actually say it was OK for Trump to ask Ukraine to work with Guiliani and Barr because Ukraine said the name Guiliani first? WTF? Their defense is extremely weak

The talking points the White House accidentally sent to Democrats contain lies.
For example, EU countries have provided Ukraine over $3.2 billion in aid. POUTS lied when he said he was waiting for them to pony up. (That’s Congress’s call, anyway. They imposed no such conditions.)

So FIRST they talked to Ukraine, BEFORE releasing it to the commitee?? 😂🤣 pic.twitter.com/82WWVRUOYw

This just in, we’ve obtained footage from inside the White House this morning:

Summary of these talking points: pic.twitter.com/y8ckpBYolk