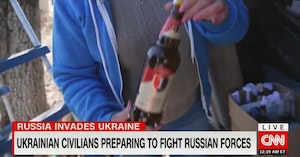 A clip from a CNN news report is catching attention for featuring a Ukrainian grandmother as she shows her growing Molotov cocktail collection to chief international correspondent Clarissa Ward. The grandma, Raisa Smatko, is just one of many average Ukrainian individuals who stayed behind as Russia invaded their home and is now doing what she can to support the resistance efforts.

“Let those Russian s–ts come here,” Smatko said to Ward. “We are ready to greet them.”

Smatko is a retired economist, presumably having no direct experience in combat, but she figured out how to make the improvised combustibles with a little help from a friend.

“Google helped,” she said when Ward asked her how she’d come to learn how to make Molotov cocktails. “You Googled it. Of course.”

She’s far from the only one taking this step in Ukraine as Russian launches attacks on cities across the nation, with a 40-mile Russian military convoy recently spotted heading toward the capital, Kyiv. Many entirely ordinary people have been seen gathering bottles to make Molotov cocktails while others shovel sand to build defenses against enemy attacks or join volunteer militias as weapons pour in from the many nations supporting the Ukrainian resistance.

In another part of her report, Ward interviewed a militia man who showed his passport, proving his own Russian roots. When Ward asked if he had a message for Putin, almost the entire thing had to be bleeped out.

Later, Ward showed Smatko in her yard, which has become something of a “staging area” as she collects supplies to donate to civilians as well as Ukrainian fighters, such as food and sleeping mats.

Meanwhile, in the western city of Lviv, an entire brewery, business stalled due to the war, decided to convert into a Molotov-making operation, since they had all of the necessary supplies anyway.

“Small craft brewers, they need to make something,” said Yuri Zastavny, owner of Pravda Brewery. “They can’t just sit idle, so we decided to use our chemical skills and our own labor to do something that requires precision and safety—exactly like beer.”

Zastavny also pointed out that many Ukrainians do have some experience with the flammable weapons, as the country has been dealing with the constant threat of Russian aggression since 2014. That was also the year of the Revolution of Dignity, when thousands of Ukrainians protested against government corruption and fought police and mercenary forces with similar improvised weaponry.

The Ukrainian Ministry of Defense has even been encouraging people to make Molotovs on social media.

“We will beat them. They won’t come,” concluded Smatko. “I believe in our Ukraine. I believe in Ukrainian people.”