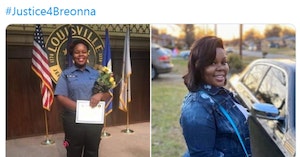 Breonna Taylor, a black female EMT worker, was killed by police after they entered her apartment looking for a suspect who not only didn’t live there, but was already in police custody. The lawsuit filed by Taylor’s family alleges that the cops broke into the apartment without announcing themselves in the middle of the night, leading Taylor’s boyfriend, Kenneth Walker, to believe they were being burgled. When he fired on them in self-defense, they fired blindly into the apartment, hitting her eight times and killing her.

She was a Black EMT, a HERO, who was murdered by Louisville police when they raided her home looking for a suspect tht was ALREADY IN CUSTODY & THT DID NOT LIVE THERE!

They shot her 8 TIMES IN HER SLEEP!

The Louisville Metro Police Department (LMPD) claims that they knocked several times and that they “announced their presence as police who were there with a search warrant” and that they only began shooting only after Walker fired first.

However, the lawsuit alleges police did not identify themselves, and that Walker—a licensed gun owner—believed someone was breaking in. Records also show that the officers involved obtained a “no-knock” warrant for the raid, which allows them to enter a home without announcing themselves. The lawsuit says the cops arrived at 1 am in plain clothes and unmarked vehicles.

The Louisville police are claiming that the apartment had some connection with the suspect they were after. The suspect’s actual residence was 10 miles away from Taylor’s home and was already in police custody at the time they raided her apartment.

The killing, which occurred on March 13, gained national attention after the family hired the same attorney leading the case for Ahmaud Arbery, who was pursued, shot, and killed by two non-police white men in Georgia.

The officers who raided Taylor’s apartment were put on administrative leave and none of them have been charged in the shooting, while Walker has been arrested and charged with the attempted murder of a police officer and assault in the first degree. He hit one of the officers in the leg while firing in self-defense.

With the Arbery case still fresh in people’s minds, many are calling for justice for Breonna Taylor.

#BreonnaTaylor was murdered by Louisville, KY police while she was sleeping in her home. They drug busted the (wrong) home. Breonna & her boyfriend thought they were being burglarized & were met with over 20 rounds. She was shot 8 times. We can’t even sleep. Say her name. pic.twitter.com/Llwd7phnO1

The segment I cried through, because #BreonnaTaylor's name is not trending *everywhere.*

Breonna Taylor was shot 8 times. She was killed by @LMPD executing a warrant at the WRONG house. This was 61 days ago, and they have done NOTHING. pic.twitter.com/fIPAxjjAA4

Race soldiers in KY went to the wrong home and executed an innocent Black woman #BreonnaTaylor . Another innocent person in the house #kennethwalker shot back and wounded one of the race soldiers. He was charged with attempted murder. Thankfully Judge Olu Stevens is presiding pic.twitter.com/5nEdLYBTOt

All of the applause for front-line workers and talk of “heroes” means nothing if we can’t express outrage, and demand answers and accountability for the killing of EMT nurse #BreonnaTaylor. https://t.co/KaPNgD7re2

#BreonnaTaylor should be alive today. Like #AhmaudArbery, she will never get the justice her life deserved. She was just 26. Please #SayHerName.https://t.co/zCJiDeseFo

“I want justice for her," Tamika Palmer, Taylor’s mother. "I want them to say her name. There’s no reason Breonna should be dead at all.”https://t.co/07KHbfdTBY

I'm calling for the Department of Justice to investigate #BreonnaTaylor's death. Her family deserves answers.pic.twitter.com/f0Dkov5D5R

This is Breonna Taylor.

She was a beloved Louisville EMT and a nurse who was fatally shot by police in her own home. She was hit 8X after cops entered w/o announcing themselves. A frontline worker, she was just 26 yrs old. Her family deserves justice.#SayHerName #BreonnaTaylor pic.twitter.com/oMrYUDQfR9

I've been posting about #BreonnaTaylor for a few days now. Let this be a lesson in how the deaths of Black Women are completely acceptable by "the movement" as a whole. They went through the trouble of co-opting #SayHerName while a whole Black Woman needed to be lifted up. https://t.co/VfLO8QaZ7J

#BreonnaTaylor “had committed no crime, posed no immediate threat to the safety of the defendants and did not actively resist or attempt to evade arrest prior to being repeatedly shot and killed by the defendants.” https://t.co/pROeXHmUlo

According to Louisville Mayor Greg Fischer, the case is currently under investigation by the police department’s Public Integrity Unit, and will then be handed over to the Commonwealth’s Attorney Office, which could pursue charges against the officers.