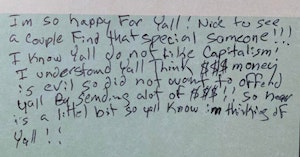 A Reddit post showing a note scrawled on a wedding card is blowing up after the OP’s uncle said that he sent the newlyweds less money than he would have because the Redditor told him that they’re not fans of capitalism one time.

According to follow-up comments by the OP, they appreciated the $200 the uncle did send, but had to tell people about the note because it’s one of the most passive-aggressive wedding cards they’ve ever seen.

“I’m so happy for y’all!” the card reads. “Nice to see a couple find that special someone!!! I know y’all do not like capitalism! I understand y’all think money is evil so did not want to offend y’all by sending a lot of $$$! So how is a littel [sic] bit so y’all know I’m thinking of y’all!!”

It’s not that we mind the word “y’all,” but using it an average of once per sentence is a bit much.

But the real problem with this is thinking it’s cool to send a family member a passive-aggressive card declaring that you’re sending them a worse gift than you would have given them if you hadn’t committed the crime of openly not liking capitalism.

According to various comments by the OP giving background details into this, the uncle makes six figures by working a ton of mandatory overtime and then takes vacations instead of looking after his mother, which the Redditor does for him.

“And just for the sake of being petty, this uncle makes 6 figures a year, did not attend our wedding because of ‘mandatory overtime’, never visits his elderly mother who I care for, but instead takes multiple expensive vacations every year and sends us Christmas presents that must be straight from a Buzzfeed article titled ‘Top 50 Amazon Gifts for the Fam.'”

The reason the capitalism comment happened was apparently because the OP had to ask their uncle to stop sending them “motivational videos of Elon Musk” because they’re not interested in dying early from chronic work-related stress to make more money than they need. In response to the uncle trying to push them into making investments they couldn’t afford, the OP let their opinion about the system be known.

“I’m honestly not really interested either way, I don’t like capitalism and I would feel slimy taking part in a system designed to make people suffer,” they said.

The photo of the wedding card proves that was a lie.

Ultimately, the Reddit user says that they don’t want to start drama with this uncle because their grandma loves him and they don’t want to cause her any trouble in her old age. Plus, they don’t really see him enough to make the argument worth it, but it was annoying enough to warrant a Reddit post.

“The only thing I’m commenting on is the fact that he felt the need to derail his congratulations to say something petty about our political views,” they said.

The Reddit users who frequent the Antiwork forum were rather appreciative that they shared, as they are generally not fans of capitalism either. Some also had ideas for what could go in the thank you card.