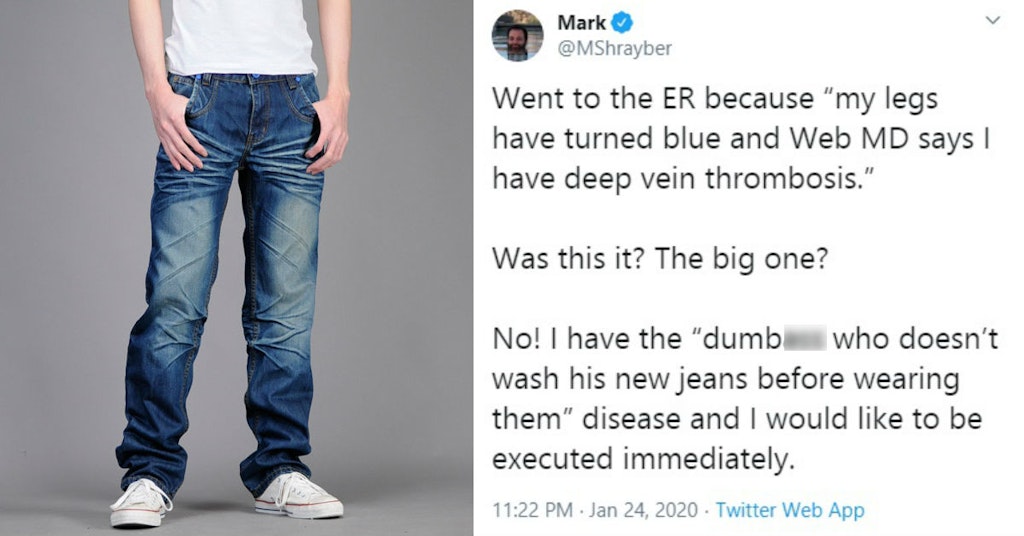 25 Hypochondriacs Share Their Best “This Is It, The Big One” Stories

Because human beings are afraid of death, we can be unfortunately prone to health-related hysteria. Every time there is news of a viral outbreak, people have a tendency to overreact a tad, like when they were packing their bags to flee to the wilderness after one American contracted Ebola in 2014. With the coronavirus outbreak in China, which is, fortunately, a lot less dangerous than Ebola, it’s more of the same.

So it was good timing on the part of Mark Shrayber when he shared a story of the time he went to the ER because his legs turned blue.

Went to the ER because “my legs have turned blue and Web MD says I have deep vein thrombosis.”

Was this it? The big one?

No! I have the “dumbass who doesn’t wash his new jeans before wearing them” disease and I would like to be executed immediately.

Thankfully, as Shrayber put it, he only had “’dumb*** who doesn’t wash his new jeans before wearing them’ disease” and was fine. These kinds of stories are even more common in the age of the internet when you can type in any kind of symptom and in seconds find out which type of cancer you definitely have. All of this helps explain why so many people were able to share similar stories of medical embarrassment.

Nearly 2,000 people have commented since he posted the story on January 24, with over 378,000 liking the tweet and 33,000 sharing. Many of the responses were from people who went to the ER due to panic attacks, prompting Shrayber to follow up and assure them that their anxiety is real and they have nothing to be embarrassed about.

Shoutout to everyone this resonated with and esp. people who have gone to the ER because they had panic attacks and were down on themselves

Anxiety is real and there’s nothing shameful about getting it treated!

Also: healthcare is a human right and should be accessible to all

He also promoted the human right to accessible healthcare, even if you only have blue dye on your legs and were tricked by Web MD into thinking you were about to die. Here are some of our favorite funny hypochondriac stories:

If it makes you feel better, I had abdominal surgery and ended up back in the ER the next day because my stool was red.

They tested a sample, of course, then one nurse asked: what have you been eating?

And that’s how I found out living on jello for a while can stain things. 😂

A day after my husband got his appendix out he was in agony. He was so sore that he was crying. He said it was worse than the appendicitis. A nurse moved him on to his side and moved up his knee. He then gave out the longest, biggest fart and was absolutely fine after it.

Went through a phase where I was seriously concerned I had a brain tumor or something because everything I ate – including things like pasta with marinara sauce- tasted like peppermint. Finally realized a bottle of peppermint extract had spilled all over my pots and pans

Reminds me of the time I was about to take my 6 month old to the ER because his foot was purple. Turned out SOMEBODY forgot to add on his daycare sheet that they were doing foot print painting that day 🙄🙄

Had a dr apt two days ago bc my 2yr old had jet black poop. Turns out my 6yr old has been training him to play nice with Black licorice and Oreos…. like a lot of Oreos.. learned a lot about my kids 🤣😂 only cost me $80 bucks and some embarrassment.

When I was in middle school I sat my parents down to tell them I have cancer bc I had mysterious bruises all over my body. When they finally stopped laughing at me they explained that I sleep walk into a table every night.

When I was a kid my mom took me to school for pre-K testing. Dressed me up in new pants, saddle shoes, cardigan, the works. She cried all day when they told her I’d be in special ed because of no motor skills. Dad had me retested in clothes that fit and I did much better.

Lol. I was convinced I had a brain tumour. Was driving. Terrible headache. Blurred vision. Turns out my clip on visor was too tight and my sunglasses were dirty 😎

I thought I had diabetes one time. Every time I peed it would smell sweet. Excess sugar in the urine! Turns out my wife put an air freshener in our toilet…

I went to Mexico and floated around a lazy river for a week enjoying some margaritas. When I got home I had large brown spots on my abdomen. That was it. I over did it. I had skin cancer. Turns out lemons and sun and water stain your skin. My dr called it ‘margaritavitis’.

When I was an infant, there was apparently a medium sized brown birthmark on my head. My mom thought it was new so she didn’t wash that area before she took me to the docs.

for future reference, if you ever eat beets, you may want to put an alert bracelet on to remind yourself of that fact later before you freak out while googling colon issues.

Suddenly started seeing double when outside the house talking to my wife. Quite disoriented I came inside to check the internet for a diagnosis. I was closely followed by my wife who was holding a lens from one side of my glasses which she picked up where I had been standing.

Was changing my daughter and saw a small wormlike thing coming out of her butt. My husband and I FREAKED OUT. We put a sample in a bag, brought her in, and learned a little lesson about what celery looks like on the other side of the digestive system.

The first time I ever got drunk enough to puke it was on red wine when I was 20 or so. I thought my stomach was hemorrhaging blood and called a friend in terror. She very kindly came over and held my hair and explained. She’s extremely successful and wealthy now and deserves it.

Don’t feel bad: I went to the ER thinking I was having a heart attack and it was sore muscles from overdoing my weekend activities. Literally a muscle spasm. Should have seen the additional spasm I experienced when the bill came!

About a year ago I thought a vein had burst in my hand bc I had a large blue spot right over my vein. Turned out I just forgot I swatched blue eyeshadow about 20 minutes before 🙃

Oh yeah yeah. I went to a gyno visit once & was sitting there in my little paper gown and the staff would NOT stop asking me about domestic abuse/my safety. Brought in a social worker. I was deeply baffled. Till I glanced down and noticed the denim dye “bruises” all over my legs

This is my hand compared to my daughter’s. My fingers were like beef sausages. Turns out when i’m anxious I rub my legs a lot. Also, new black jeans 🤦‍♀️ pic.twitter.com/Jt50m0G4qU

I once went to an Urgent Care for what I swore was Strep Throat, because it looked like my tonsils were covered in white mucous.
After swabbing my tonsils, the Doctor told me it was bread. F’ing bread from a sandwich I ate earlier that day.

If it makes you feel any better I once had a full freak out because my tongue was black and webMD told me I was dying—until my husband reminded me I’d taken pepto-bismol. The internet is the worst (also the best)

My brother was once convinced he had MS because his legs were “tingling” but it turned out he was wearing his roommate’s pants, which were several sizes too small.

… reveal a chipboard style stuff inside (weird hey?). Anyway I 'fixed' it by spraying it with plasti-kote enamel. During the night I must have forgotten & sat on it (I don't remember feeling it tho) & got enamel stuck to my buttocks. It had dried on during the night!

I had a complete panic on the newborn maternity ward in hospital, frantically pressing the emergency button to summon nurses, bc my baby had turned blue. Turned out it was just my blue dressing gown reflecting on her face. She has survived my appalling mothering and is now 26.