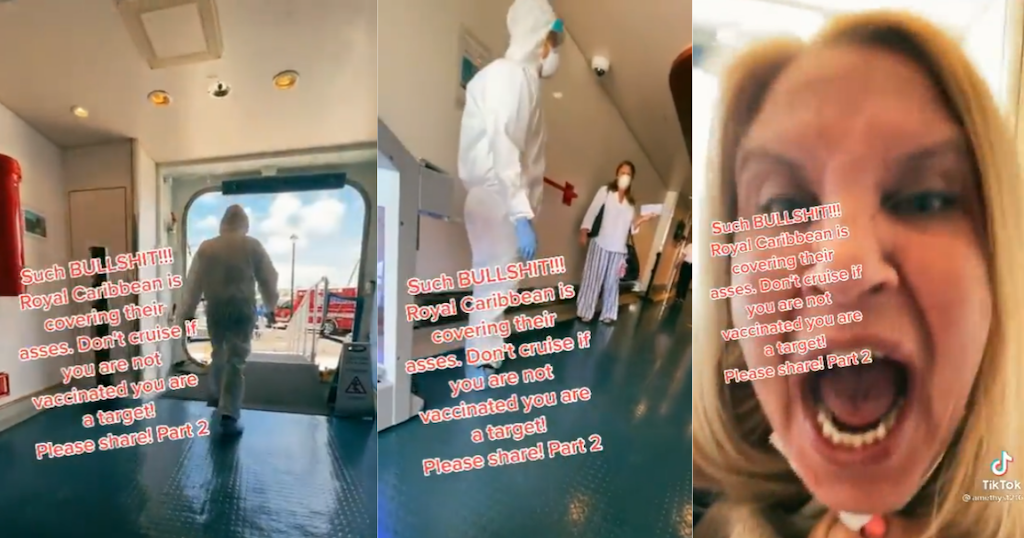 Recently, there has been a problem with Americans thinking the pandemic is over, like this woman who tested positive for COVID-19, got kicked off a cruise, had a meltdown, and filmed it all for us to enjoy.

The incident is making the rounds on the internet, thanks to the woman’s over-the-top performance, the cruise’s close quarters, and nearly everyone having a smartphone on hand.

The video was pulled from the woman’s account. In the video, she makes reference to it being filmed on Instagram Live, and many smartphone users are very familiar with the “screen record” feature. The video was posted to TikTok, and then on Twitter.

It begins by showing the unvaccinated woman’s shrink-wrapped luggage being taken away by two employees in hazmat suits.

Typical protocol when dealing with a potentially infectious person.

The woman voice can be heard, and she’s clearly irritated.

“As if we’re really contagious. As if I really have COVID,” she says.

Girl, didn’t you just test positive!? Yes, there have been few instances of false positives but if that’s the case, the best action to take is playing cautious and following the cruise’s protocol.

“I had COVID! Three months ago! I have HIGH. POSITIVE. ANTIBODIES,” she yells at a cruise employee who is dressed in a hazmat suit.

From the perspective the video was filmed, it looks like she was in a wheelchair, being accompanied by staff.

Things really got aggressive when she spotting an ambulance.

“I’M GONNA BE IN CHARGE OF MY OWN FU**ING LIFE!! I’M TIRED!!” she screams at the employees, who are definitely not getting paid enough.

After loudly protesting against an ambulance, she begins to say on film that she is dizzy and will probably have a heart attack.

We then got a glimpse at Karnival Kruise Karen and she looks exactly as you might: white, middle-aged, blonde, and screaming about an injustice that is not really an injustice.

Needless to say, her behavior wasn’t great, which is why we were all in for a treat when the video made its way to Twitter.

You know, the platform that will eat its own if it has to.

As expected, people were dragging Kruise Karen and supporting the cruise staff.

One Twitter user noticed an uncanny resemblance to a character we all know and love.

She then followed up with another video saying she “knew” the COVID test would come back positive and accusing testing staff of faking her result.

Anyway, we wonder how she’s managing with all this new internet fame.