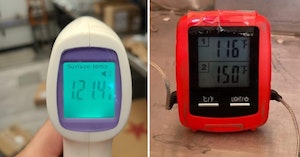 Drivers for the United Parcel Service, better known as UPS, have been sharing photos of thermometers reading triple digits in their delivery trucks to show the nation the kind of conditions they’re expected to work in while delivering all our things to us. Apparently, most of these trucks lack any air conditioning, even though many medications are delivered by companies like UPS and are often sensitive to extreme temperatures.

Just as important, because nothing can be delivered without the drivers doing the delivering, the workers are finding it increasingly difficult to make it through the hot summer days as they continue to get hotter due to climate change. Many people, including those running the company, would never tolerate working under temperatures reaching 116, 124, or even 154 degrees Fahrenheit.

The hottest temperatures are in the back of the truck, which may not be where the drivers spend most of their time, but it is when they’re on their feet and often lifting heavy boxes. This kind of heat, especially paired with serious physical exertion, presents a high risk of heat-related injuries. According to the CDC, there are around 702 heat-related deaths in the U.S. every year, and that number has been rising.

Heat stroke can occur after the body temperature rises to 104 degrees or more, and people who get a lot of physical exercise, including UPS drivers, are not immune. In 2019, a former offensive lineman for the New York Giants died of heat stroke at the age of 32 after working outside of his family’s shop in over 100-degree weather during a heat wave in Arkansas.

One UPS driver photo obtained by NBC reads 154.3 degrees Fahrenheit and appears to have been taken in the back of their truck.

The company’s excuse for not providing air conditioning in their trucks, neither for the sake of their workers or customers relying on them to deliver medicine, is that it would be “ineffective” because the drivers make “frequent stops.” The drivers, as well as anyone aware of the benefits of a blast of cold air to the face in the middle of summer, disagree.

Drivers have even said that the company refuses to install simple fans in their trucks. It sure sounds like this is more about saving money to stuff into CEO pockets than what is effective in preventing dangerous heat-related illness.

One UPS customer responded to the growing movement among the drivers by reporting that two shipments of chemotherapy drugs were ruined by the heat in these trucks, only finally getting the life-saving medication thanks to special efforts by a worker.

“UPS was delivering temperature-sensitive chemo drugs for my dog,” wrote software engineer Jim Shields. “They were ruined by heat the first two deliveries, and the 3rd was only a success because the wonderful driver put the box in her personal cooler.”

It should not be up to the drivers to do extra, unpaid labor with a personal item to get chemo drugs to people without them being melted in 150+ degree heat because UPS won’t fork over the money for AC. But they’re happy to install cameras in order to better surveil their workers.

People are now calling for OSHA to investigate the company, but unfortunately this department dedicated to protecting workers, especially those who should be paid more, is severely underfunded.