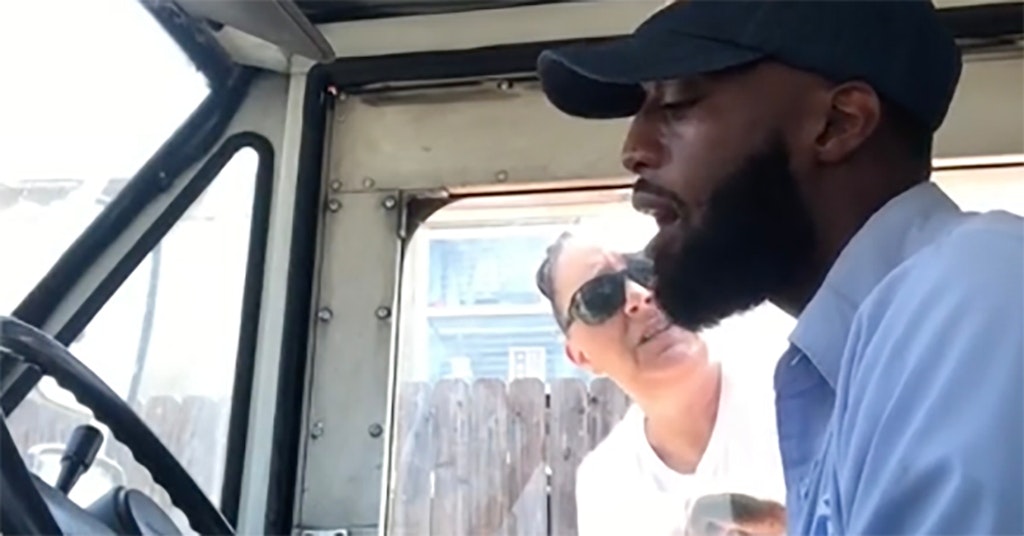 A person appearing to be on his mail delivery route—or rather, taking a break from it—was captured in a two-part TikTok ignoring a Karen who appears to have needed her mail right then. He proceeded to drown her out with music, enjoying a beverage while singing along.

The video comes from @bowtiedev, a TikTok account proclaiming to come from “the best mailman in the world.”

In the first part of the two-part video, which has rounded up an astounding 14.3 million views between being posted to the platform on Saturday and Tuesday afternoon, the mailman can be seen singing along to a song and nodding, when a Karen comes up to the mail truck window and bangs on it. The mailman, however, is unbothered and continues nodding along. The caption laid over the video reads, “When she wants her mail but it’s your lunch break.”

In the second part, the Karen continues to pound on the window, asking, “Can I get my mail? You’ve been sitting here for 30 minutes.” After he continues to enjoy his lunch break, she says, in true Karen form, “I’m calling your supervisor.”

Both videos share the hashtag #mailmanproblems, indicating that this might be a thing that’s happened more than once.

TikTok was full of comments supporting the mailman, with one commenter noting, “Trust me when I say he deserves every second of that lunch,” and another saying, “I befriended our postman this year and was honored he started taking his breaks in front of our house.”

Another group of people wondered about the Karen, with one person wondering, “What could possibly be so important that she’d bug an essential worker on his break?”

Another observed, “Damn, she’s really hitting that window like does she think you don’t know she’s there!”

There’s a sequel that was posted Sunday, though, with the mailman and the Karen embraced, soundtracked by Peaches & Herb’s “Reunited.”

He captioned it, “A day later she respected his lunch and got her mail.”