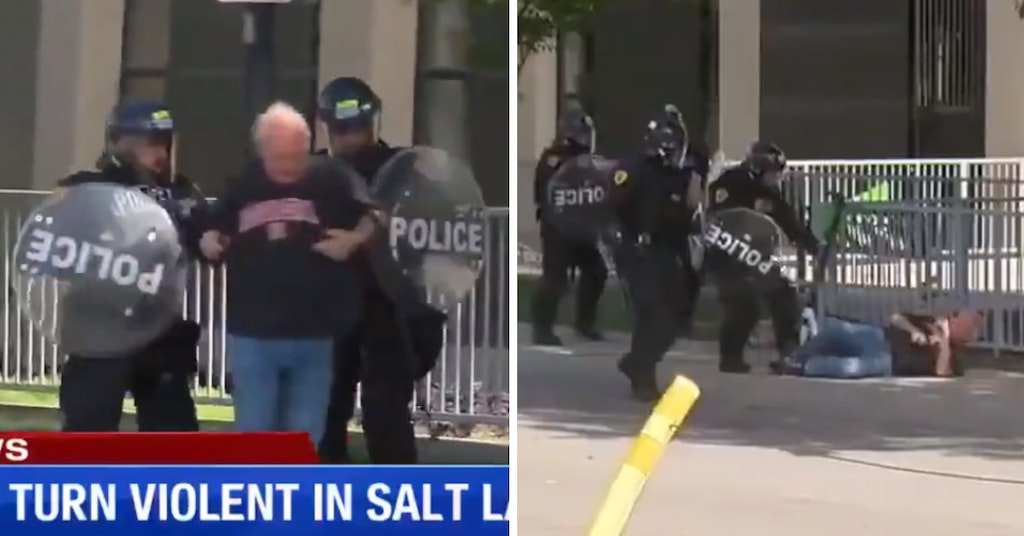 Examples of police brutality abound as cities all over the U.S. implement curfews, calling in riot police and SWAT teams, and even call in the National Guard in response to uprisings against, well, police brutality. One of those is from Salt Lake City, where riot cops were caught on camera by a local news team repeatedly shoving a man who appeared to be elderly and who was holding a walking cane until he fell to the pavement.

Salt Lake City cops shove down an elderly man with a cane for the crime of standing along the street: pic.twitter.com/PCLkHqQtJg

The man did not appear to be doing anything prior to the attack and can be seen in the background simply standing next to a sign and observing. After shoving another man with a large bag down the street, one of the riot cops spots the elderly man and makes a beeline for him with another officer.

The two of them both appear to shove the elderly individual down the street with the others, and then apparently when he doesn’t move fast enough, probably because he’s old and uses a cane, one of them shoves him from behind and he stumbles and hits the pavement.

Two other officers then move in to help him to his feet. A number of other riot police then surround him, hopefully to offer medical attention. However, it is unclear if the man was injured or what happened to him after the attack.

Over the weekend, police and members of the National Guard were filmed across the U.S. committing acts of brutality, including firing on journalists, people standing in their own yards, and repeatedly attacking non-violent protesters. A young girl was filmed screaming in agony after she was allegedly maced by a Seattle police officer.

Every incident only makes the public angrier.

Cops across America are escalating everything

Of all the videos of police response, this may be the worst because it is a totally unprovoked attack a guy most likely waiting for the bus.

No justification – the Police Team doesn’t even appear to be assembling there and need the space.

And he wasn’t going to help, he had no intention on helping that guy until the other officers starting helping, he just stood there at first smh

When does it end?