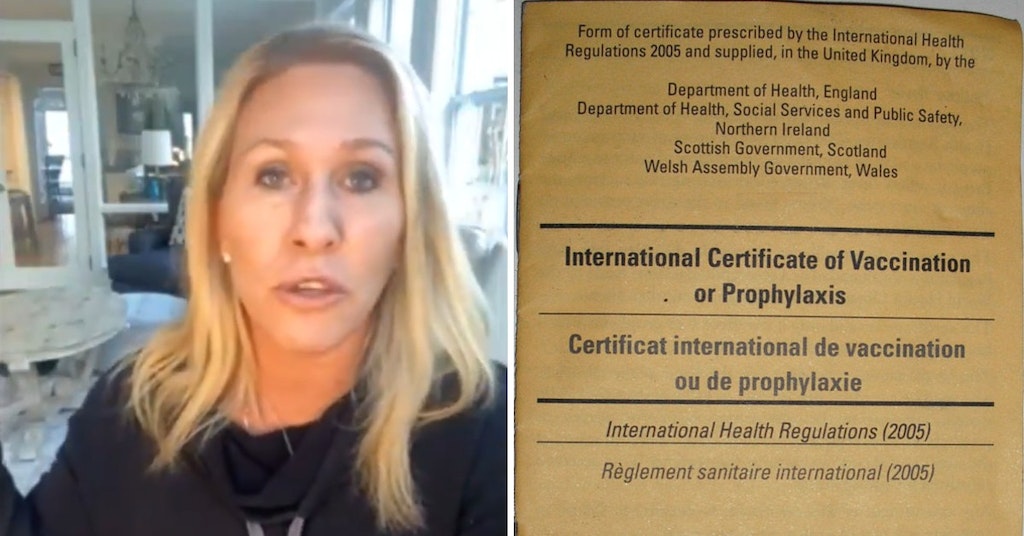 U.S. conservatives are very unhappy to learn about the potential emergence of “vaccine passports,” appearing now in nations like Japan, Denmark, and China, which serve as proof that someone has been vaccinated against COVID-19.

Rep. Marjorie Taylor Greene, ever ahead of the curve, has declared such a thing “Biden’s Mark of the Beast,” referring to a symbol prophesized in the Bible’s wackiest chapter that labels people a follower of the Antichrist.

The reality is that vaccine passports have already existed for a long time for international travelers. Many nations require people to have received certain vaccines against specific illnesses to travel there.

All Biden has done about this so far is to issue an executive order for related agencies to look into whether it’s feasible for the U.S. to add the COVID vaccine to this existing system.

Most of the details, however, are being left up to the private sector, which is normally something that Republicans love. Greene, however, seems to be turning against her corporate overlords on this one, accusing them of either fascism or communism, she’s not sure.

“This is what the Biden administration is trying to talk to these private companies into doing,” she babbles. “Well let’s analyze that. You see, it’s still the same thing. It’s still fascism, or communism, whatever you want to call it, but it’s coming from private companies. So I have a term for that — I call it corporate communism.”

Some do have legitimate concerns about private companies creating another class split, as the poor are more likely to come up against difficulties in obtaining the vaccine, and there are some people with certain medical conditions who will not be able to get it at all. However, Republicans are going to need to reconcile with their “free market” philosophy if they’re going to start taking on corporations who decide to utilize vaccine passes for things like public events and access to travel.

Meanwhile, the Libertarian Party of Kentucky is under fire for comparing COVID vaccine passports to the yellow stars that Jewish people were forced to wear under Nazi Germany. Their tweet is still up even after it earned a cussing out from Seth Rogen.

In spit of this brief but brutal tongue-lashing, the comparison between something that basically already existed for many decades and might temporarily extend to things beyond international travel to the murder of millions of Jewish people is continuing among conservatives. Today’s Jewish people are kindly asking if they could please, for once, stop.