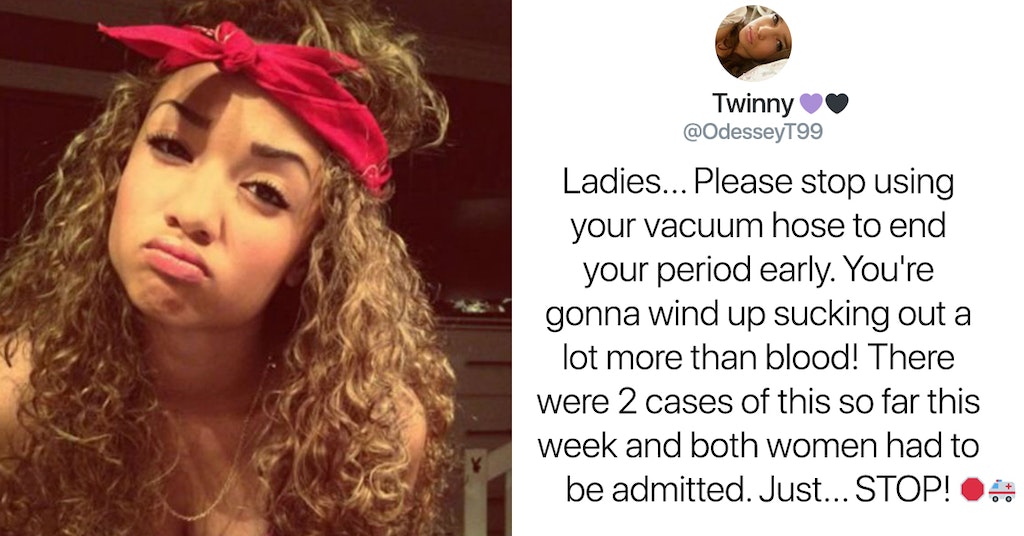 Yes, you read that right. A nurse took to Twitter with a passionate plea, as she had dealt with two cases already this week. Please, ladies, do not take a vacuum hose and attempt to suck the last of the menstrual material in order to end your period early. Not only is there zero chance that would work (and a decent chance it would smell up the house), it’s pretty dangerous.

As a woman myself, I can absolutely understand the burning desire to make the bleeding stop, especially if you’re about to go on a trip, or maybe it’s almost summer and you would like to have a nice swim or maybe a cold drink in an outdoor hot tub. But, as this nurse explains, you cannot force your period to end before its time. Especially not with a vacuum.

Because you could go into shock.

According to Vidisha Joshi of Meaww, the process used by the two women admitted this week for attempting to vacuum out their uteruses was “first described by feminist activists Lorraine Rothman and Carol Downer in the 1970s, who called it a way to perform an at-home abortion before Roe v Wade.” Sounds like a great argument for keeping safe, doctor-performed abortions legal.

Yale Medicine pediatric emergency-medicine doctor Kirsten Bechtel explained to Seventeen the reasons why this practice is so dangerous.

“Part of the vaginal or uterine wall can be sucked in, tear, bleed, perforate, or cause an infection (pelvic inflammatory disease) by forcing bacteria on the outside of the perineum into the uterus,” she said. Thank you, Kirsten, that’s horrifying.

If your period is lasting too long or you’re planning something that would be interrupted by a long period, there are plenty of safe options. Skipping the week of non-hormonal “white” pills in your birth control pill pack and continuing to take the hormonal pills is a perfectly safe practice and very effective in stopping your period from happening at all. You can also talk to your doctor about various hormonal and other medical options if your period is troubling you. Put the vacuum hose down.

The nurse, who goes by “Twinny” on Twitter, got into a bit of trouble with her hospital for posting the now-viral tweet, but thankfully, she was cleared of all wrongdoing for her service in warning women and other menstruators everywhere to stay away from this dangerous practice.

The rest of us, meanwhile, will keep talking about how horrifying this is.

Are these the tide pod kids that are grown up now?

Was it at least a wet vac?

I’ve been a woman for many, many years and I have never heard of this. And I hope I never hear about it again.

Twinny did not immediately respond to God.DailyDot.com’s request for comment, probably because her hospital administration won’t let her. Regardless, we thank her for her service.