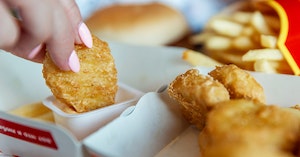 A vegan mother’s frustration over her ex-husband giving their 8-year-old daughter meat caused some division on reddit.

u/veggiecoparent posted to the infamous Am I The A**hole subreddit to explain the situation she suddenly found herself in.

She explained that both she and her ex-husband were vegans throughout their relationship, a lifestyle initiated by him. They had a daughter, and raised her vegan as well, until they divorced a little over a year prior to the story in question.

One night, when the original poster picked her daughter up from her father’s house, the 8-year-old saw a McDonald’s on the way home and had a “full blown meltdown demanding chicken nuggets.” Obviously, mom didn’t stop, and instead fed the girl soup when they got home.

“She hates me, I’m a terrible mom, Dad would have let her eat chicken nuggets,” she recalled. “She wore herself out crying.”

The next day, the Redditor says she reassured her daughter that she wasn’t mad at her for eating meat when she was with her dad, but called him up later to berate him for feeding their kid meat without talking to him first.

“He told me I was being uptight and he didn’t tell me because he knew I’d overreact. I’m controlling and I don’t need to be privy to every single thing he does when our daughter is with him,” she wrote. “I’m f—king MAD. There are vegan options at McDonalds — he didn’t have to feed her chicken but since he did, I would have appreciated a heads up.”

The OP also added that she’s fine with her daughter choosing her own diet when she’s “old enough,” but is angry because she feels her husband “unilaterally made this choice” without her knowledge or consent.

Some Redditors weren’t thrilled at the idea of forcing a vegan lifestyle on an 8-year-old, and tried to point out that dad choosing to give their daughter meat isn’t really any different than mom choosing to only feed her vegan options.

Others felt like they understood where the mother was coming from and felt that her husband’s failure to communicate was the real problem.

A later update let readers know that mom decided to let her daughter try out meat-based dishes although she generally has continued to cook plant-based meals at home. But this solution is one that seems to be working for everyone — kid included — for now.