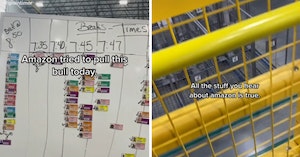 An Amazon warehouse employee and TikTok user created a now-viral video showing yet another way in which the company is micromanaging its exhausted employees, displaying a whiteboard that shows exactly when each worker took a break and shaming people for being “late.” This is another in a long line of accusations that Amazon faces of mistreating its workers.

In particular, Amazon workers routinely complain about an inability to take breaks when they need to and the fact that there are not enough bathrooms in the building to allow them to relieve themselves within the allotted 10 minutes. As a result, multiple employees have claimed that they have to urinate in bottles in order to keep from being penalized and fired for letting their “efficiency” ratings fall, even posting photos of these bottles online as proof.

“Amazon tried to pull this bull today,” says the overly cheerful robot voice to the tune of “Bezos” from Bo Burnham’s new comedy special. “They started putting our badges under the times we ‘took’ our breaks.”

The fact that “took” was put in quotes might suggest that managers were not being honest about their workers getting the required breaks, which would go against national labor laws, but the TikTok user declined to elaborate.

“All the stuff you hear about Amazon is true,” the video concludes.

The board shown the video displays a grid with an “out @ 8:50” column on the left and a “Late” column on the far right, with specific times employees took their breaks in the middle, displayed by their badges. It’s unclear if 8:50 was supposed to be their scheduled break time and the company is shaming people who took their break a little early or late (possibly to avoid long bathroom lines) or what is happening.

If they mean that 8:50 is when the shift ends, one wonders why they are scheduling people to take breaks just an hour before their shift ends.

Either way, the video quickly gained over 1.5 million views and a whole lot of commenters arguing about working conditions. There were enough pro-Amazon folks coming along that the video poster took the time to help them out with some TikTok advice.

“This ones for the old angry men: the more you interact with a video, the more similar ones show up in your feed,” he wrote. “So if you don’t like my video, just scroll. I know yall probably didn’t know that since you’re pretty much just dust so ima cut yall some slack.”

“Shhh… it’s just white board marker… wipe it off,” suggested one user. “Continue to wipe it off every time it’s re-written (& it will be) take turns, make it a game.”

When contacted by the Daily Dot, Amazon said they are “working on a response.”