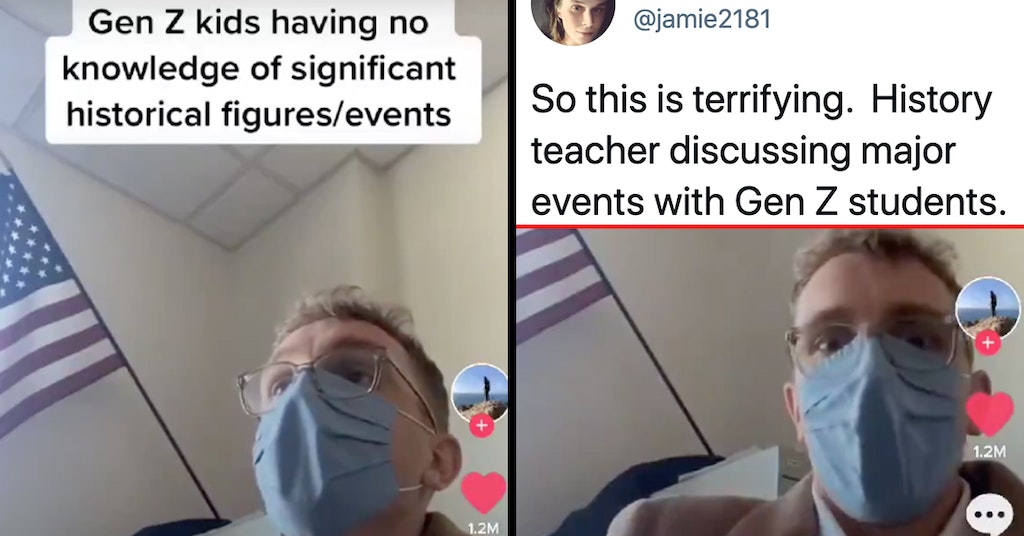 
A TikTok video by a history teacher as he goes over some very important moments and figures in the U.S. with seemingly clueless students has set off some debate after spreading to Twitter on Sunday.

In the video, which has gained over five million views on TikTok, you can hear the teacher’s students claiming things like “Helen Keller is the Nazi guy” and asking if Pearl Harbor is a bridge.

One of the discussions now trending on Twitter is the bizarre fact that a conspiracy theory has spread among Generation Z via TikTok that says Helen Keller either did not exist or was faking her disabilities. For the record, yes, she was real, and yes, she was that amazing.

Thankfully, it’s clear that at least some of the students in that classroom are as floored as the teacher at their classmates’ ignorance. The kid who starts out the video seeming to confuse Helen Keller with Adolf Hitler doesn’t even recognize the name “Hitler” as others make noises of disbelief.

“Helen Keller is a Nazi terrorist that is a male, is that what you’re telling me?” the teacher asks as the student replies in the affirmative. “Are you thinking of Hitler?”

The video then skips ahead to another student making the claim that Keller was not a real person.

Keller was not only real, she was such an incredible human being that she inspired multiple plays and movies about her life and her birthplace is now marked by a museum in her honor. After learning how to communicate in a world that would normally write off a child who had become both deaf and blind, she became a renowned author and activist, and one of her books on socialism was burned by the Nazis.

According to The Guardian, the idea that Keller is a myth started on TikTok likely as a joke. However, a disturbing number of young people considered to be a part of Generation Z now appear to doubt her existence or think that she was faking her disabilities.

This theory is one of the most reviled among the actual disability community, who attribute the rise to this theory to widespread ableism, specifically the belief that disabled people couldn’t possibly be capable of all Keller achieved.

Others are irritated that the popularity of the video is spreading the idea that all Generation Z kids think Helen Keller is fake or are just as uneducated about history as some of the folks in that particular classroom.

Some have pointed out that it’s the teacher’s job to teach the middle school kids these things, while fellow educators are saying that this is a crisis within the system as schools have become increasingly obsessed with standardized testing.

Others have noted that older generations also seem to have glaring gaps in their knowledge of history, at least when it comes to the events that put white supremacy into glaring focus.

Regardless of who is most correct here, the U.S. clearly has an education problem, and has for a long time.