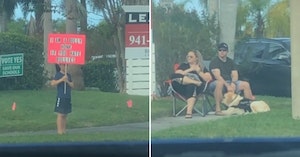 A viral video showing a child standing by the street holding a sign declaring himself a bully while his parents look on has resulted in some fierce debate over whether public humiliation is ever an appropriate punishment, even one who may be an actual bully. The video, which has earned 6.7 million views on TikTok, shows the kid holding the sign as he’s filmed from the inside of someone’s car while the passengers declare the scene to be “mean” and “foul” and one boos the parents.

The TikTok user who posted the video declared in the description that it’s the kid’s father who is the bully.

Many commenters disagreed with the assertion that this was a bad way to punish a child, accusing the poster of being “soft” for speaking out against it. When it comes to real experts in child development, there has been a growing consensus that punishment, in general, does not work to change behavior and only fosters distrust between the kid and their caretakers, plus has the potential to result in trauma. At best, punishment may only result in kids hiding bad behavior from their parents, but without getting to the root of the issue, the behavior is likely to continue.

“As soon as the child thinks it’s not being watched (as soon as the situation seems different in some way), the tendency to engage in the behavior will reassert itself,” wrote psychology professor Dr. Michael Karson in 2014. “Punished children do what was punished behind their parents’ backs, or as soon as they get to college.”

Despite these findings, parents around the world are still likely to believe that punishing children is necessary and effective in changing behavior, even around something as serious as bullying. While it’s refreshing to see some parents actually trying to do something about their child after he was caught being a bully, there is always a reason why kids lash out in this way, and unless something is done to address this, there’s no reason to think that public humiliation will stop him.

Worse, it could traumatize the child, which will very likely only make his behavior worse, but either way, many feel the risk of trauma is not worth it.

“Humiliating children, is traumatic,” said a TikTok commenter. “Especially these they aren’t fully developed. Kids who act out tend to have soemthing [sic] wrong at home.”

Still, former victims of bullies have a hard time sympathizing with the kid and are just relieved to see anything being done at all.

“No this is good parents I was bullied to the point of wanting to un-alive myself and nothing was ever done to my bullies,” said another user.

The U.S. in particular seems to have a dismal track record when it comes to stopping bullying in schools, with many victims reporting that nothing was done to help them or declining to report the problem because they felt it would only make them bigger targets. The result is that one in four kids in the nation will be bullied at some point during their childhood, according to a Yale University report. They also found that many bullies experienced early trauma that hampered their emotional development, causing anger issues and reduced empathy.

Perhaps if we tried compassion over punishment for these troubled kids, we’d have both less bullying and fewer school shootings in this country.