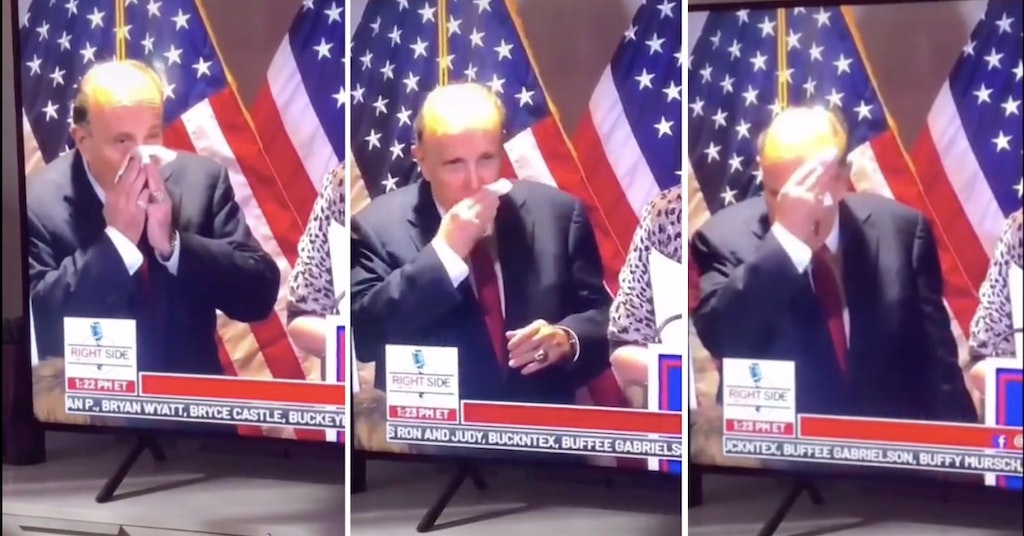 
Look, I’m no fan of Rudy Giuliani. He managed to burn through whatever goodwill he acquired after serving as New York City’s mayor during 9/11 long ago. It was a time when many people were willing to extend him thanks whether he earned it or not. Since then, he’s made everyone regret it, attaching himself like a barnacle to Donald Trump’s presidency. He’s encouraged the president in his dealings with Ukraine and is now supporting Trump’s apparent coup attempt.

That said, is there anyone in his life who cares about him at all? How are you letting your man go on TV like this?

First, there was Four Seasons Total Landscaping fiasco, and then there was his total meltdown on Thursday during another press conference at the Republican National Committee headquarters in Washington D.C. Like, he was literally melting:

Whatever the toxic substance is that's oozing out of Giuliani's head, it's still not the grossest thing he was caught with on his face. A TikTok user named @sloppy_donuts caught Giuliani doing something even more disgusting in the background as he waited to speak.

The user narrated the whole event while filming it, explaining that Giuliani blows his nose, then turns the tissue SNOT SIDE OUT and wipes it over his mouth, forehead, and all over his face.

The horrible video made it to Twitter and the replies are mostly people saying how absolutely gnarly it is, but I think this about sums everything up:

If only someone would make Giuliani's caretaker aware of this moment and help him find a hobby that isn't destroying America.