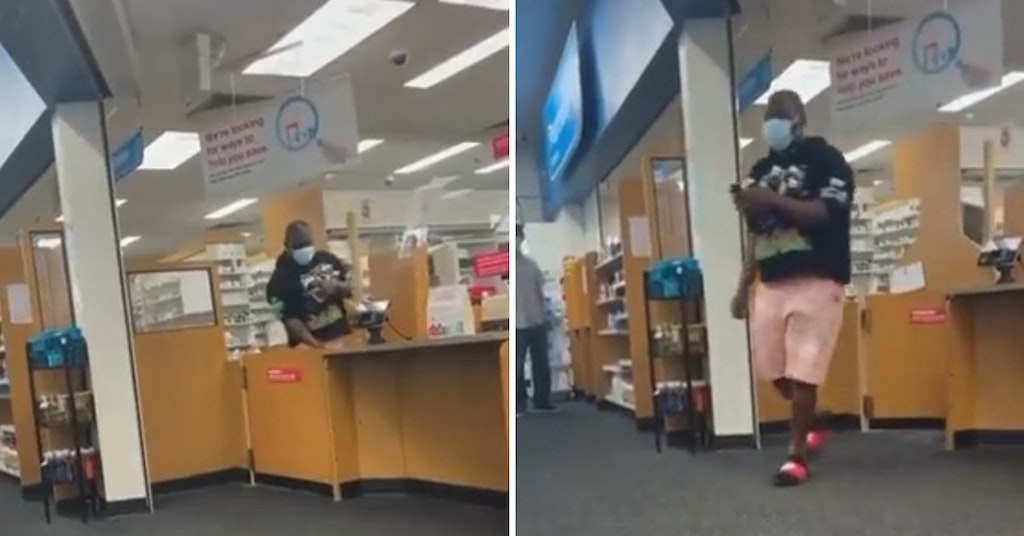 A viral video showing a California man appearing to shoplift pharmacy supplies at store Walgreens has sparked renewed debate over the alleged increase in cases of petty theft at this particular chain of drug stores as well as whether this is a crime problem or a drug prices problem. Beyond drug prices, it could also be a general poverty problem pushed to the brink by a pandemic.

Pharmacists stand by watching this occur due to the Walgreens policy prohibiting employees from interfering with shoplifters for their safety and the safety of their customers. This is a common policy among retailers and authorities generally encourage bystanders not to try and confront shoplifters in the act — it’s simply not worth the risk when companies like Walgreens make billions annually.

Many commenters on the video have noted that it appears (though has not been confirmed) that the man was taking bottles of codeine syrup — a cough syrup kept behind pharmacy counters due to the fact that it’s technically an opioid. It is possible to use that syrup to make more dangerous drugs, but if someone needs to sell illicit substances to survive, that remains a poverty problem and a societal failure.

Regardless of whether the man intended to sell the medicine or pass it out to homeless folks suffering from COVID-19, a lot of people are unsympathetic with Walgreens, which has claimed that shoplifting alone has driven them to close several locations around the San Francisco area. However, they have failed to explain why other drug store chains have closed no stores in the same city or why they’re not having the same issue in cities like New York.

Some have pointed out once again that wage theft by big companies like Walgreens vastly outweighs the amount of money stolen from workers compared to profits lost by petty theft of their wares. One graphic shows that wage theft in the U.S. adds up to nearly $40 billion annually, far surpassing the combined impacts of all other types of theft including larceny, burglary, and auto theft.

These numbers have driven some people to wonder whether a bit of shoplifting from a national chain is really theft or if it’s just the masses getting a little of the wealth that was stolen from them back. In late 2020, Walgreens itself settled a class-action lawsuit against it for wage theft and labor violations to the tune of $4.5 million — far more than the cost of an armful of the good cough syrup.

Though there are still plenty of folks on Twitter saying that shoplifting is always wrong, it appears there may be a public shift occurring in the perception of people engaging in low-level “criminal behavior.” More and more seem to be seeing this kind of thing as a societal problem with clear and simple answers — pay people enough to live and don’t jack up the prices of medicine and other things humans need to survive, and maybe nobody will feel compelled to steal.