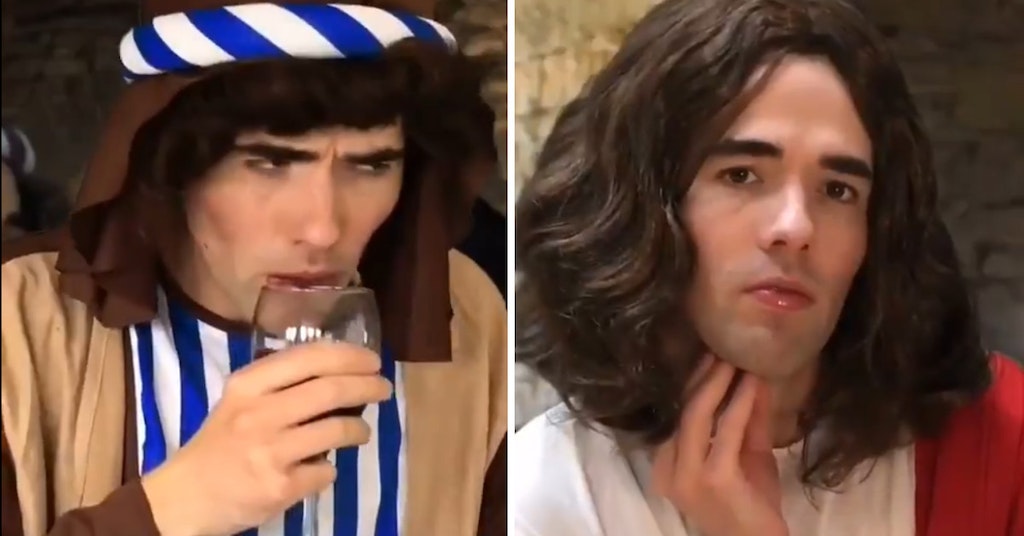 A recent TikTok video by London-based comedian Adrian Bliss is being widely lauded as hilarious for its depiction of Jesus’ disciples complaining about their messiah’s ability to turn water into wine. In the video, Jesus makes wine for all his followers, but one, in particular, is unhappy because, unfortunately, the savior is only able to make Merlot.

“And lo, I have turned water into wine,” says Jesus.

Cut to a disciple taking a sip before immediately spitting it back into the glass.

What follows is a discussion between the disciples and Jesus about what other kinds of wine he might be able to make, but Jesus says he can’t make a Malbec, Pinot Noir, Rioja, or even a Châteauneuf-du-Pape.

“Just drink it,” whispers the less-picky disciple. The first guy does, with some difficulty.

“I could probably do a Shiraz,” says Jesus, which only gets a gag from the disciple.

Regardless of individual taste in wine, people are loving the sketch, with the TikTok video racking up over 8.5 million views. It’s not uncommon for Bliss’ videos to get a couple of million views, but this one is particularly popular, spreading right to Twitter where other comedians are praising it for its comedic take-down of wine snobs.

Even a “Certified Educator” for London’s Wine & Spirit Education Trust, Tim Haslam, enjoyed the video and had his own wine-based joke to add.

Bliss is well known in the U.K. for his semi-historical comedy videos, including the one about Abraham Lincoln not wanting to go see the play (because turns out it’s STOMP) and an Egyptian pharaoh who doesn’t want anyone making a big fuss after he dies (but is upset as a ghost to find his corpse was dumped in the middle of the desert.