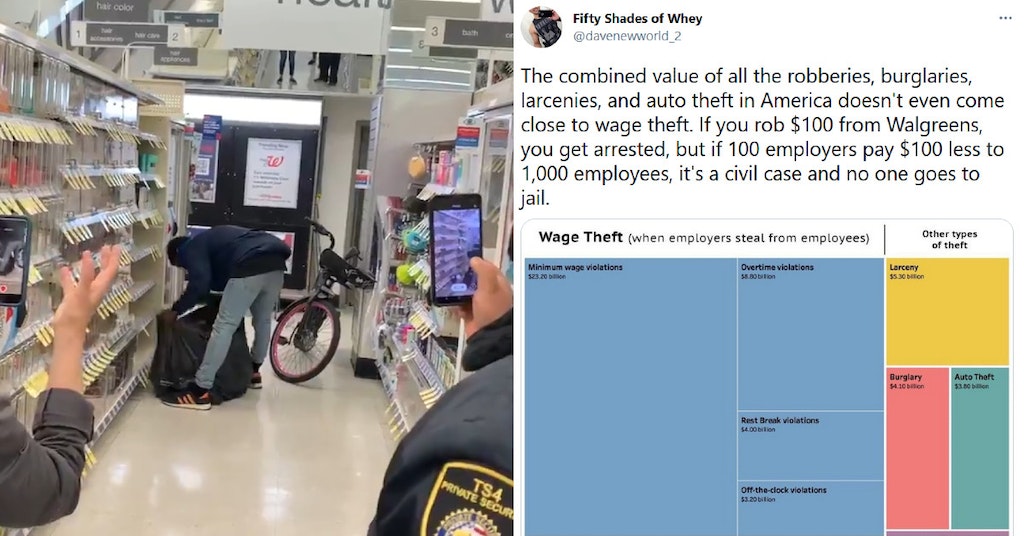 The video was recorded by local San Francisco reporter Lyanne Melendez and shows a man packing up the last of some items in his garbage bag as another bystander and a security guard film him before he rides his bike between them and out the front door.

The footage set off a wave of claims that petty crime like this is out of control in San Francisco, where rent for a basic apartment is among some of the highest in the nation. Some have said that theft like this is the reason that multiple Walgreens locations in the area have closed, though this claim has been disputed as shoplifting has a very limited impact on the bottom line of a chain as massive as Walgreens.

Others complained that the security guard, though they reached out to try and grab the sack from the man on the bike as he rode past, didn’t do enough to try and stop the theft. However, many have pointed out that OSHA guidelines prohibit security guards from directly interfering with shoplifters or touching any items that were stolen, directing them to film from a safe distance and contact the police. This is for the safety of everyone involved, as confronting shoplifters can easily turn the situation violent.

Technically, the only way the security guard was in the wrong was by trying to grab the garbage bag.

On the other side of the people claiming this represents a total collapse in “law and order” as life goes on as always, many are pointing out that company wage theft vastly out-steals shoplifters and in fact represents a greater theft than all other stealing crimes combined.

They also stressed the fact that while shoplifters can go to jail for stealing some hair products, corporations like Walgreens only get taken to civil court for wage theft and even if they lose, often don’t end up paying back the full amount they stole.

In addition to wage theft, corporations like Walgreens also routinely use tax loopholes and offshore havens, some illegal, to avoid paying their fair share in taxes to help their communities prosper while paying their employees paltry wages. It’s also hard to believe that any amount of shoplifting could be hurting their bottom line while their CEOs get tens of millions in bonuses every year for their hard work in dodging taxes and locking up baby formula.

Still others have pointed out that a better way to prevent shoplifting besides allowing security guards to attack people or throwing them all into our already overcrowded prisons is to invest in a community where theft isn’t necessary because everyone has what they need. San Francisco has a large homeless population due to a drastic lack of affordable housing and the massive spike in rent in recent years, but those without permanent structures to live in still need toiletries.