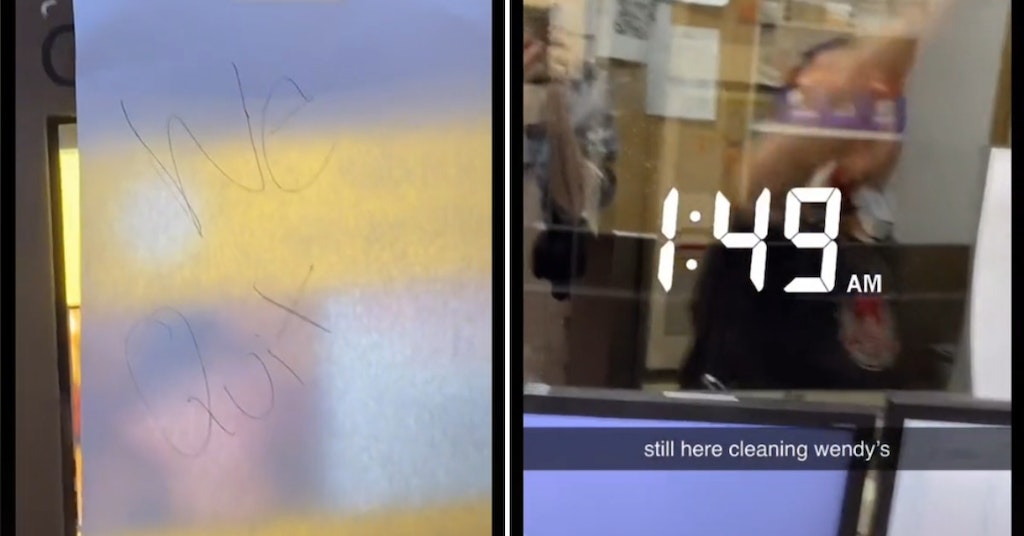 A TikTok video gained over a million views after it was posted by the former assistant manager at a Wendy’s fast-food restaurant explaining how he spent months working 85 hours per week or more at a pathetic pay rate without help until they finally couldn’t take it anymore. The video appears to be a compilation of clips from videos the young individual took at work showing what looks like exclusively very young employees being overwhelmed with orders, receipts, and Post-it notes piling up and tired smiles all around.

Finally, TikTok user @mintjuul.666 explains over the clips, they reached the end of their rope and announced to their workers that they were quitting. The assistant manager took 17 workers with them when they did so, closing up the Wendy’s after making some food for themselves without cleaning up. At about 8 pm, they left a “we quit” note on the drive-thru box and went home.

The saga of this Wendy’s decline began with the COVID-19 pandemic hitting, the stress of which led many of the restaurant’s employees to quit, including both the general manager (GM) and assistant general manager (AGM). The TikTok user was promoted from shift manager to AGM soon after this, bumping his pay up to a paltry $14.77 per hour and landing him a workload more than double the standard 40 hours per week with little help.

“I had no GM for about three months and I was working 85 hours a week every week with no day off, basically the whole three months,” he said. “I made $14.77 as an AGM keeping this store up and running.”

Unfortunately, when they did finally get some help in the form of an actual general manager, this only made things worse.

“I eventually got a new GM. She came in and completely ruined this place within two weeks. The 34 people I had on my schedule all basically wanted to quit, and I was just tired of it.”

After three months of a workload that no human being should have to endure, basically living at work except to sleep for a quarter of the year while being given no help by upper management, this young person finally snapped and most of the remaining staff made a bit of a party out of quitting.

“One day I just came in and I said I’ve had enough and I couldn’t do it anymore, so I told everyone and about me and 17 other people quit that day. We didn’t clean up, we closed down about 8:00 at night, we made a little taco bar, and we left it a mess.”

This video comes as yet another example of service workers mass quitting due to increasingly poor conditions in the workplace paired with dwindling help all with no increases in pay or benefits. Signs at chain restaurants, grocery stores, and other establishments often owned by multi-billion dollar corporations like this have become a common sight across the country, either declaring that the staff had quit or asking customers to be patient due to short staffing.

The TikTok user posted a follow-up video after the one explaining how they quit, which actually happened back in June, showing one-star reviews from customers complaining that the restaurant had gone downhill recently, about after the time the new general manager was hired.

“This Wendy’s used to be on the top of its game,” wrote one reviewer. “Order always right, never forgot the sauces, Frosty machine never down, you name it. However in the past few months, quality has gone SHARPLY downhill.”

It’s almost like it’s the workers who make a workplace run and the entire company would fall apart without them because upper management can’t or won’t do their jobs.