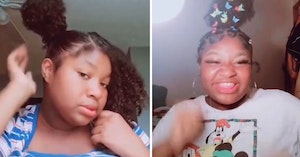 Here’s How 16-Year-Old Ma’Khia Bryant Needs To Be Remembered: With Adorable Videos

As the trial of former police officer Derek Chauvin ended with a rare murder conviction, police across the nation continued to act with deadly violence as a reminder that the problem is systemic, going far beyond the actions of one man. Just 20 minutes before the Chauvin verdict was read, police in Columbus, Ohio shot and killed a 16-year-old girl by the name of Ma’Khia Bryant while she was in a fight with some fellow teens.

Witnesses, including Bryant’s aunt, said that she was fending off an attack with a knife when the police arrived but that she dropped it before officers opened fire without warning, striking her four times. She was soon pronounced dead at a nearby hospital.

The Columbus Police Department quickly released body camera footage from the perspective of the unnamed shooting officer. Some media outlets have reported that Bryant appears to swing a knife at another girl, but the poor video quality makes it difficult to tell if she had anything at all in her hands.

The officer can be heard shouting “get down” before he shoots Bryant multiple times, but does not issue a warning that he is about to use deadly force.

Already traumatized by the constant influx of police shootings and brutality, Black folks on social media are refusing to share the body cam video and are instead circulating her own TikTok videos showing her dancing happily to music and doing her hair, as any average teenage girl often does.

Bryant’s aunt, Hazel, was filmed calling on news media to report on the facts about her niece “or don’t report nothing.”

“She was a good kid. She was loving,” said Hazel. “Yeah she had issues, but that’s okay. All of us go through s–t. You know what, she was 15 motherf—ing years old. She didn’t deserve to die like a dog in the street.”

Bryant’s mother also described her daughter as a peaceful and loving person.

“She was a very loving, peaceful little girl. She was an honor-roll student, and Makiyah had a motherly nature about her. She promoted peace. That’s something that I want to always be remembered.”