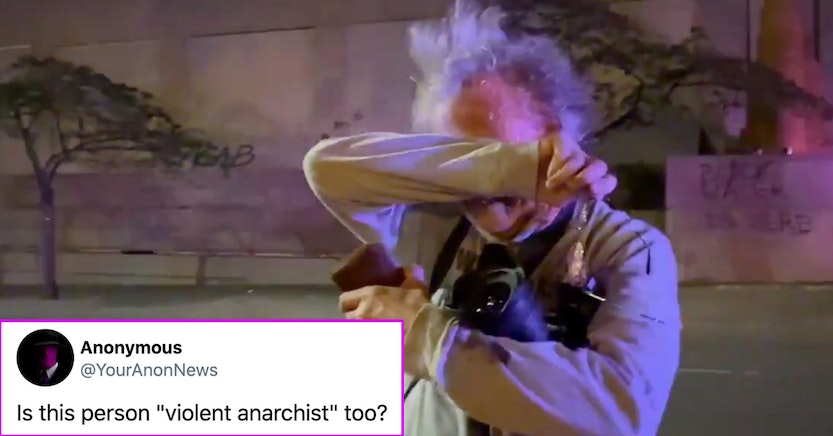 As the nightly standoffs in Portland between protestors and federal agents continue, the footage coming out of these clashes only grows more harrowing.

Early Sunday morning, the mysterious feds that have infiltrated the city were caught pepper spraying a photojournalist who identified himself as a Vietnam vet.

Mike Hastie stood a reasonable distance away from a line of heavily armed and geared up feds, passionately explaining to them that when he was a medic in Vietnam, they committed atrocities by order of the government, seemingly attempting to impart to these anonymous, camouflaged forces that just because the government orders them to do something doesn’t mean they’re on the right side of history.

Hastie appears to be alone in the street, with other protestors hanging back. There is clearly no threat. Yet in the middle of his speech, a fed comes by and pepper sprays him directly in the face at close range, and subsequent feds passing by push Hastie out of the way as he’s recovering.

The moment is terrible to watch, but it doesn’t stop Hastie from following along and finishing out what he wanted to say.

He finally has to stop to wipe the pepper spray out of his eyes.

“Whoa, that was a direct spray,” he says to Andrew Kimmel, the man recording.

Another person nearby says there are no medics out there to help.

This incident is clearly one that cannot be misconstrued to say that agents were in any way threatened by Hastie, who stood alone, and unarmed, and identified himself as a vet immediately.

But it didn’t stop these anonymous law enforcement personnel from assaulting him any more than it’s stopped them from assaulting any of the other protestors, peaceful or otherwise.

Kimmel, who has been documenting the Portland protests, also did a follow up interview with Hastie on the spot.

“These police officers and this government claim that they’re abiding by law, and that we should abide by these laws,” Hastie said. “When I went to Vietnam, our government violated those laws, and we killed innocent people every day.”