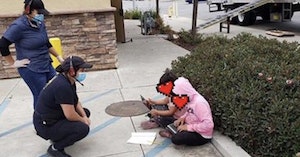 In some states, schools are being forced to open, while in others kids are desperately trying to figure out how they’re going to keep up with classes virtually. Not every home is outfitted with the technology for connecting to the classroom via Zoom or downloading assignments. A viral photo of two teenagers sitting in the parking lot of a Taco Bell is sparking conversation about what we’re asking young people to do in a pandemic just to keep up with their education.

The picture was originally posted by @Ms_Mamie89 on Instagram. In the caption, she wrote:

My mom sent me this picture today. These 2 young girls were looking for a place with WiFi to do their school work so they sat near Taco Bell to connect to the free WiFi. A lot of us don’t have to worry about having a proper WiFi connection or a quiet place to work from home. Every student from preschool through college should have free access to reliable WiFi especially now. What can we do as a community to pull together for students who need something as simple as WiFi in order to succeed? Please share and tag people in our community who can help.

Later she edited to add that the girls were identified by their school district and give hotspots. But she is certain other young people are having the same issue and is attempting to organize more outdoor cafes and other areas for kids without reliable wifi to do their school work that isn’t on the floor next to a dumpster.

The pictures make their way to Twitter, where people were outraged, and also attempting to organize a list of hotspots for kids:

Salinas, where the girls were photographed, is adjacent to the extremely wealthy and tech heavy Bay area and is predominately composed of Latinx communities. As many said, the digital divide is real and it is being widened everyday by not just the pandemic, but the lack of care given by government officials all year round. This is just another symptom of a sick system.