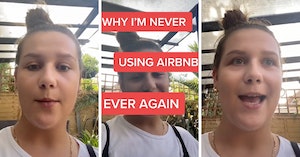 A woman recorded a series of TikToks to warn users against Airbnb after a “nightmare” series of events during a vacation with her mother.

TikToker Emma Watkins (@emmaa.watkins14) shared in the videos why she plans on “never using Airbnb ever again.”

In the first video, Watkins described the ideal location of the Airbnb in southern France — except that when they arrived from the UK, there was a huge safety issue.

“So we arrived at this apartment and we were greeted by someone who wasn’t the owner but was obviously employed by the owner to do the check-ins,” she said. “He was taking us around the apartment explaining everything to us and we got to the balcony door and he said, ‘this doesn’t lock it’s broken.’ And I tried to close it and it wouldn’t. It wasn’t that it wouldn’t just lock, the thing wouldn’t close.”

While the apartment was on the second floor, it could have been easy for someone to climb up and walk right in through the open balcony door.

“So obviously we turned around and said, ‘we can’t stay here. It’s not safe,’” she said.

Watkins attempted to discuss the issue with the Airbnb host, who told her to contact Airbnb directly. She said he didn’t appear to make “an effort to fix the problem” and that when she finally got in contact with an Airbnb support representative, they told her the host claimed a “window is broken” and that they would give her a rate reduction on the stay. She attempted to explain that it was a balcony door and not a window, making it unsafe, but the rep did nothing and said their shift was over and she had to talk to someone else.

In a follow-up video, Watkins said she filled out a complaint form on the app and flagged the listing as “unsafe.”

“Bearing in mind a significant portion of time has passed since we arrived and it’s getting dark, and we are two ladies in a foreign country without a safe roof over our heads,” Watkins said.

She got in contact with a new Airbnb rep, who apologized and said they would find the woman “alternative accommodation.”

When Watkins voiced concerns that they wouldn’t be able to find something in a similar price range and location, she said the rep gave her a 30% “above value” coupon to book something similar at a higher price point.

She claimed that after a while of searching, the Airbnb “ghosted” her, and she decided that it was time to book a hotel for the night while they waited for Airbnb to respond.

Watkins added that she was “completely misled” about the value of the coupon, which was good for a maximum of 300 Euros.

“Airbnb [is] responsible for their hosts at the end of the day,” she said in the final video. She and her mother finally decided to return home, as all other accommodations were too expensive for a week.

They paid “extortionate” prices for a return flight and hotel, and while they were refunded for the Airbnb booking, Watkins thinks it’s only right for Airbnb to reimburse them the cost of the hotel and return flight as well.

Responses to the viral TikTok videos were mixed, with some saying they’d had similar experiences, other telling Watkins they had never had an issue, and still others telling her to seek legal action against Airbnb.