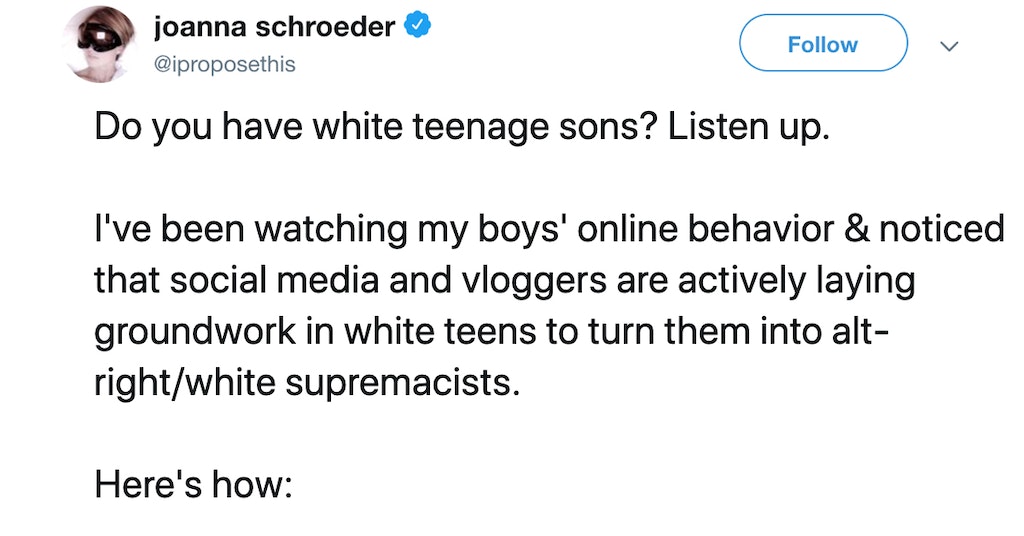 In a Twitter thread that has since gone viral, writer Joanna Schroeder laid out her observations of her own children and her theory on how online media can steer white teenagers towards extremist views.

Schroeder began by speaking from her own experience as a mother of teenage sons.

Do you have white teenage sons?

I’ve been watching my boys’ online behavior & noticed that social media and vloggers are actively laying groundwork in white teens to turn them into alt-right/white supremacists.

According to Schroeder white, mostly male teens initially absorb various forms of bigotry through memes which they then ignorantly share.

It’s a system I believe is purposefully created to disillusion white boys away from progressive/liberal perspectives.

Being kids, they don’t see the nuance & repeat/share.

They are obviously criticized for this by those not in their similarly influenced peer group.

Then they’re called out for these jokes/phrases/memes by parents, teachers, kids (mostly girls) at school & online.

The boys then feel shame & embarrassment – and shame is the force that, I believe, leads people to their worst decisions.

According to Schroeder, the teen’s reaction to this reaction is what leads to them rejecting mainstream and progressive views as the “too sensitive” thinking of “snowflakes.”

The second step is the boys consuming media with the “people are too sensitive” and “you can’t say anything anymore!” themes.

For these boys, this will ring true – they’re getting in trouble for “nothing”.

This narrative allows boys to shed the shame – replacing it w/anger.

The result, says Schroeder, is that the teens feel persecuted and turn toward hateful ideologies.

And who is their anger with?

And nobody is there to dismantle the “snowflake” fallacy.

These boys are being set up – they’re placed like baseballs on a tee and hit right out of the park.

These are often boys from progressive or moderate families – but their online behavior & viewing habits are often ignored.

Here’s an early red flag: if your kid says “triggered” as a joke referring to people being sensitive, he’s already being exposed & on his way.

Schroeder advised parents to take an interest in their children’s online behavior and to discuss the underlying assumptions with them.

Look through his Instagram Explore screen with him. Explain what’s underlying those memes. Explain why “triggered” isn’t a joke, what a PTSD trigger is actually like. Evoke empathy without shaming him.

Remind him you know he’s a good person, but explain how propaganda works.

Propaganda makes extreme points of view seem normal by small amounts of exposure over time – all for the purpose of converting people to more extremist points of view.

Use my baseball analogy, if you want. Tell your son that he doesn’t have to be anybody’s fool.

Teenagers have an innate drive toward independence, and once this system is exposed, they’re likely to start questioning the memes & vloggers’ intentions.

Tell them you are always there, not judging, to look at content & try to spot the lie – no judgment.

She also had some comedy recommendations that wouldn’t rot teenager’s brains.

You can also watch political comedy shows with him, like Trevor Noah, John Oliver, Hasan Minhaj. Talk about what makes their jokes funny – who are the butt of the jokes? Do they “punch up” or down?

Our boys want funny guys to relate to. Give them John Mulaney, Hannibal Burress, Hasan Minhaj, Neal Brennan, Dave Chappelle … then TALK TO YOUR SONS about that funny shit. Break it down.

(Also give them women comics, obviously, but that’s beside the point here).

Show them that progressive comedy isn’t about being “politically correct” or safe.

It’s often about exposing oppressive systems – which is the furthest thing from “safe” or delicate as you can get.

Disprove this “snowflake” garbage once & for all.

Schroeder ended the thread by sharing a few further resources and by encouraging parents to “stay engaged and challenge our kids without shaming them.”

Above all, we need to stay engaged & challenge our kids without shaming them.

I’m lucky, my kids are smart and have a smart, critical, progressive dad who isn’t afraid to call bullshit when he sees it.

But I’ve seen SO MANY white boys falling prey to this system. So beware.

Thanks to the commenter who shared this thread by journos doing the real work on this subject. @Max_Fisher you’re a hero for this. https://t.co/teYUU8619a

And someone suggested this relevant interview with a former white supremacist on how he became radicalized. https://t.co/r9g1o6Aoiq