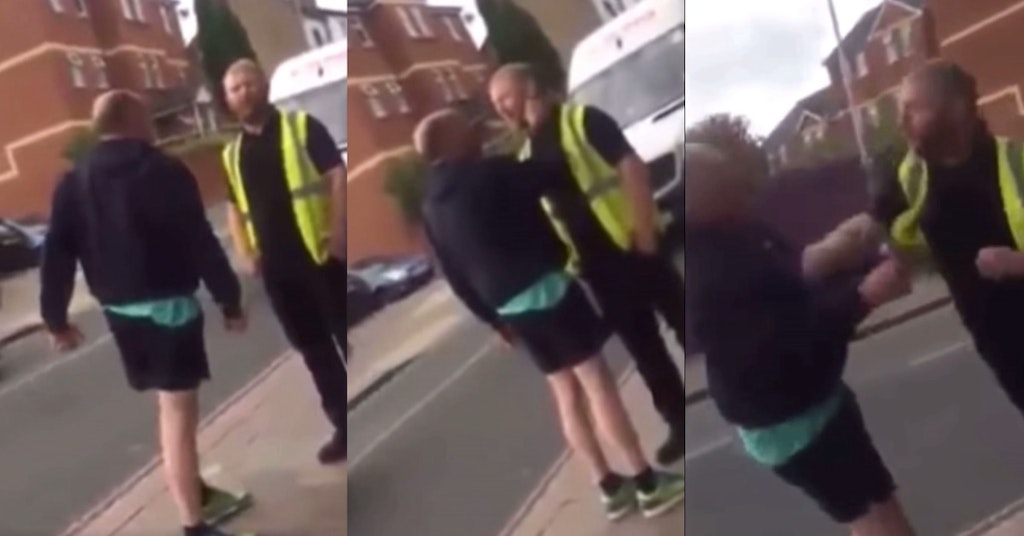 
Reddit is the perfect forum for a video with no context that makes you sad for humanity. The subreddit r/PublicFreakout is where we find the best of the best of bizarre confrontations, wild screaming, and damaged property. This video posted by u/ashdoherty has two out of three.

It seems to be taking place in Northern England, so to be honest, I'm not really sure what anyone is saying. But it looks like the guy in shorts is trying to start some sh-t with the guy in a vest. The vest guy resists and resists until the man in shorts claims he has "fiddled" and four-year-old, which is slang for molestation in the area. He also makes a very crude gesture to emphasize his claim.

Then he gets knocked right out of his shoe.

The OP shared a translation for those of us who can't understand the dialect:

SUBTITLES FOR THE NON-BRITS:

"You’re an idiot you’re working on a Saturday"

"Yeah cos I’ve got a fucking job, I’ve got kids to pay for"

"I sell Mamba to your kids (drugs)"

"What the fuck are you on about, is that drugs is it?"

"Listen, I FIDDLE (UK slang for sexual touching, deriving from kiddy fiddler which means pedo) with your kids!"

It's hard to say if this vile man has actually committed this crime or if he was just that desperate to be hit in the face, but as commenter newbrevity wrote, "Never heard someone brag about being a pedo to win a confrontation."

I wouldn't necessarily call getting knocked into the street "winning," but it was satisfying for the rest of us.