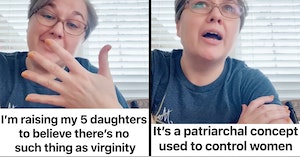 Society’s approach to sex and abstinence and the whole idea of virginity has evolved over the years on the whole, but we still live in a patriarchal society where women’s value is partially derived from “sexual purity,” creating dissonance for many young people.

But one mom is explaining why she is making a point to deconstruct the myth of virginity in raising her children, and it’s resonating with other moms looking for ways to raise their kids up right.

Cayce LaCorte (@book_mama) made her video in response to another TikTok asking folks to “name something the way you raised your kids that people think is weird but you think it’s healthy.”

“I’m going to get a lot of sh*t for this,” she said right off the bat.

“I am raising my five daughters to believe that there is no such thing as virginity,” LaCorte continued. “It is a patriarchal concept used to control women and serves no purpose other than making women feel bad about ourselves. Just because some guy randomly sticks his penis in you at some point in your life does not change your worth, it does not change who you are, it doesn’t do anything other than it happened.”

LaCorte added that she does believe that “sex is a big deal,” just not in the ways that we may have been trained to believe.

“It has nothing to do with your first time; it’s just ridiculous. The whole concept is ridiculous,” she said.

The TikTok mom acknowledged that she does frequently get pushback from other moms who think that the way she is raising her daughters might cause them to be “promiscuous,” but clearly, she disagrees.

“I’m raising them to be good people and have solid foundations and make their own choices, and make smart, intelligent choices, not because some book says not to,” she insisted.

For the most part, viewers were on board with LaCorte’s way of thinking.

“I never really thought about this to be honest,” @lynn_love_333 replied. “Mom of two little girls. I will absolutely be adopting this!!”

“I have 2 girls and I think this is how I will teach them they are older. This would’ve made me feel more self worth when I was younger,” @samanthaawool agreed.

LaCorte also told BoredPanda that “there is still so much pressure placed on young men and women surrounding virginity that if we remove that thinking, it opens up a whole other avenue of thought and healthy conversation.”