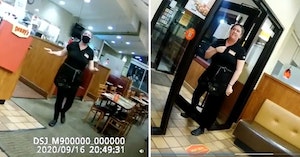 A video of a Denny’s hostess announcing that she’s quitting after a group of anti-maskers came in claiming religious exemptions to mask mandates (of which there is no such thing) went viral as every working person lived vicariously through her. The video was caught on one of the anti-masker’s cell phones and made its way onto Reddit, where people thoroughly enjoyed the woman’s demonstration of being absolutely fed up with this nonsense.

You can see the hostess making up her mind as she begins to walk away from the unwelcome customers.

“You know what I quit, I f—ing quit,” she says after the man filming claims the exemption. “What is wrong with you people?”

She throws down the Denny’s menus and summons her manager before nearly storming out the door, but the manager seems to convince her not to outright leave.

“Roger, I’m not working for this s–t anymore,” she says to him. “These guys won’t put their masks on, I’m sick of feeling like this.”

The man behind the camera tries to cite the Civil Rights Act of 1964, claiming that it “says we can claim a religious exemption for not wearing a mask.” This is, of course, not true, as mask mandates were not a thing prior to the current pandemic and after the pandemic of 1918 disappeared. The law also contains a specific provision saying that it “does not guarantee your entry into any particular business establishment.”

This is why establishments can have a “no shirt, no shoes, no service” policy regardless of your religion’s stance on wearing shirts and shoes.

While trying to avoid losing a staff member in the middle of a shift, Roger again explains to the anti-maskers that the state mandate can’t be overridden by an imaginary exemption.

“I’m sorry you can’t come in here without a mask, the governor said ‘no mask, no service,'” he tells them.

The men again cite the Civil Rights Act incorrectly and claim that “we’re not sick,” again exposing the fact that anti-maskers are apparently incapable of understanding the concept of “asymptomatic.” After being refused once more, they say that Denny’s has lost their business.

As the men begin to leave, the hostess points out that “he’s filming us” to Roger. The man filming then has to issue a parting shot, though that doesn’t work out perhaps as well as he’d hoped.

“Don’t believe everything the media tells you, okay?” the man says.

“Yeah, f— yourself,” the hostess recommends.

This nameless essential worker has swiftly become a modern-day hero to anyone who’s had to work in the service industry, especially during this time of pandemic.

“I don’t think I have ever asked for anybody’s info before but like if someone finds out if this woman has a gofundme or whatever I will happily toss her a couple bucks to get her through until she can find a new job,” wrote one Reddit commenter. “Nobody should have to deal with this shit and its total f—ing crap that companies aren’t aggressively trespassing a–holes like this.”