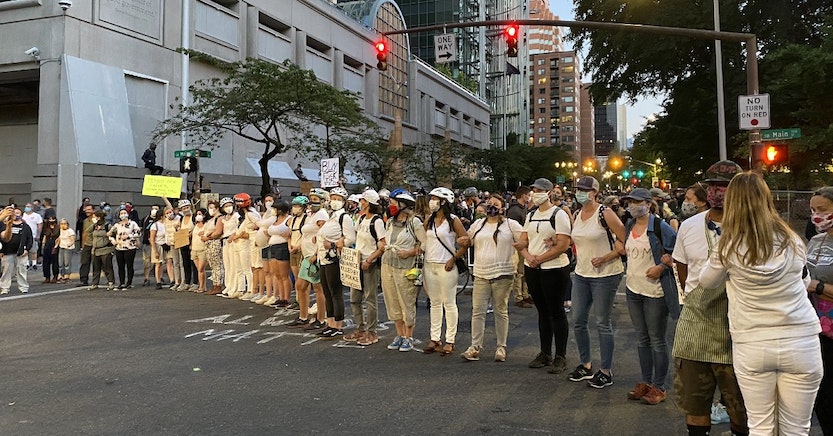 Protests in Portland, Oregon continued over the weekend, with demonstration crowds more than doubling in size after news that the Trump administration had sent in a mix of federal agents who were snatching people off the street into unmarked vans, seemingly without cause, went national.

Some of the new protesters included a group of fed-up mothers who formed a “Wall of Moms” to protect largely younger demonstrators from the increasing use of rubber bullets, pepper balls, and other “less-lethal” munitions from the feds and Portland police.

At least 30 moms initially marched up to the federal courthouse, which protesters in Portland have targeted on many of the dozens of nights they’ve shown up since national unrest over the killing of George Floyd and general police brutality began in late May.

The idea for the Wall of Moms began as a Facebook event started by local mother Bev Barnum, who called on her fellow parents to stand up against the heavily armed presence of federal officers in their town.

Last night after getting gassed and shot at by the feds, I swore I wasn’t going back to protest again — but when I heard about a gathering called Wall of Moms, I couldn’t stay home. #fedsout #blacklivesmatter #wallofmoms pic.twitter.com/m30aGQAthZ

“We moms are often underestimated. But we’re stronger than we’re given credit for.”

Barnum advised other moms to wear a mask and helmets to protect against violence from the federal agents and local police, which has come to seem inevitable. And indeed, the Wall of Moms endured tear gas, flashbangs, and more, but stood their ground.

Night 52 of protests in Portland saw a wall of mothers standing firm in a line against camouflage-clad feds at the courthouse chanting "stay clear, the moms are here" and "leave our kids alone." Right up until the tear gas and flashbangs resumed. pic.twitter.com/lxQByARsBE

Speaking with BuzzFeed News, many of the moms acknowledged their white privilege, intentionally dressing in white and classic “mom clothes” in an attempt to get the federal agents to hold back on the brutality.

The #wallofmoms is at the frontline and they’ve put sunflowers through the fence. SUNFLOWERS, y’all. They’re fearlessly wielding flowers. #PortlandProtest pic.twitter.com/CUXjpZd8Fv

At one point, the Wall of Moms approached the fence around the Justice Center and hung sunflowers through the gaps, evoking the iconic photos of protesters placing flowers in the muzzles of soldiers facing down anti-Vietnam War demonstrators in the 60s.

Barnum has created a permanent Facebook group for protesting moms and plans to keep going out and protecting those exercising their First Amendment rights until they’re no longer needed.

“We’ll be out until no protester needs protecting,” she said.