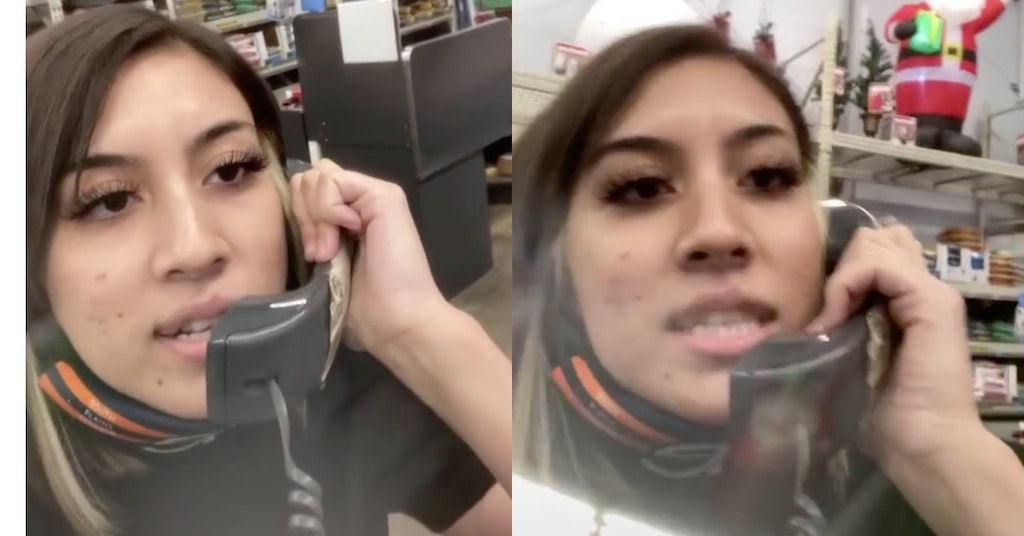 Every single one of us has fantasized about quitting at least one job in a wonderfully dramatic way, really sticking it to the supervisors and coworkers that made every day so much more difficult on the way out. But there probably aren’t very many of us who can say we’ve actually done anything more than maybe — maybe — not giving a full two weeks notice when we called it quits.

But when one former Walmart employee in Lubbock, Texas, decided enough was enough, she wanted the whole world to know just how badly that job sucked.

A TikTok user by the name of @shanaquiapo did what so many retail workers dream of, and quit right over the intercom system — and yes, she did record it for TikTok. But this wasn’t just some brief announcement of her resignation, oh no. Shana had some grievances to air on her way out.

“Attention all Walmart shoppers, associates, and managers: my name is Shana from cap 2 and I just wanna say come on here and say Henry is a racist, stinky prick,” she said. “This company fires Black associates for no reason. This company treats their employees like s—t.”

Shana’s comments were interspersed with more specific call-outs, noting coworkers and managers that she says were racists, sexists, or straight up perverts. She also gave a shout-out to the friend who got her the job a year ago before going out with a bang.

“F—k the managers, f—k this company, f—k this position, and f—k that big lazy b—ch Chris Price. I f—king quit,” she said, slamming the phone back into the cradle.

The more cynical among us may wonder if the whole thing was just a fake stunt for TikTok clout, but multiple people came forward across social media platforms to say they were in the store while Shana had her big moment, even before they had seen the video posted to TikTok.

“Someone just quit over the intercom at Walmart,” @karinaaragonezz tweeted. “My friends are I were there and it was amazing.”

Another Walmart shopper managed to whip out their phone when they realized what was happening, recorded the end of Shana’s big exit, and uploaded it to Snapchat.

Those videos are particularly notable because they manage to capture the amazed reactions of several of Shana’s co-workers, with one even doubling over with laughter in the middle of the store.

Some people reacting to reshares of the original TikTok on Twitter felt that it was an inappropriate way to quit, but many — including some claiming to be in charge of hiring employees themselves — said they didn’t see any issues at all.

And some folks who claimed to be former coworkers of Shana’s or employees at other Walmarts were chiming in throughout the comments.

Even the famous Ariel who got Shana the job in the first place chimed in.

And while not everyone can afford to quit their jobs in such an amazingly dramatic manner, at least we now always have this video and can live vicariously through Shana.