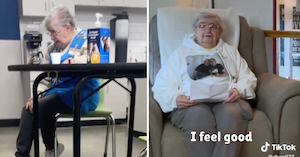 With the help of TikTok, a man helped raise over $186,000 for an elderly Walmart employee so she could pay off her mortgage and retire.

Devan Bonagura, @dbon973_ on TikTok, created the video in the hopes it would help employee Nola.

“Life shouldn’t be this hard,” reads the caption of the 15-second video. It shows Nola, an elderly woman wearing a Walmart vest, staring at her lap as she sits in the break room. Devan added the caption, “I feel bad.”

Bonagura doesn’t work for Walmart but for a third-party company that sells phones at the store. But he couldn’t forget Nola. Others couldn’t either. They urged Devan to make a GoFundMe page for her so they could chip in and help her out.

“Nola works at Walmart and that says enough. Let’s all come together and help.”

Some people were worried that Devan was a scammer, but he tried to reassure them he was for real. “She is going to get every single dollar that was donated,” he said.

Devan also claimed that Walmart had contacted him about the TikTok and asked him to cease and desist, delete the GoFundMe page, and return the money to those who donated. Apparently, the company had received threats and backlash after the video went viral.

“So, I told them: ‘Do what you gotta do, because I’m getting this money to this woman one way or another,'” Devan said.

On November 5th, Devan posted a video of him meeting with Nola to tell her about the fundraiser: “They saw that you’re a very hard worker, obviously. We are all super proud of you, and we wanted to offer you the $110,000 that has been raised for you.”

“I’d accept it, but I’d still have to work until I get the other $60,000 paid off the house,” she told Devan. “It won’t take long now with all that money,” she said, adding that she would retire as soon as she got it. “That’s what’s holding me at work — the house.”

The GoFundMe page did indeed get enough donations for Nola to pay off her mortgage and retire.