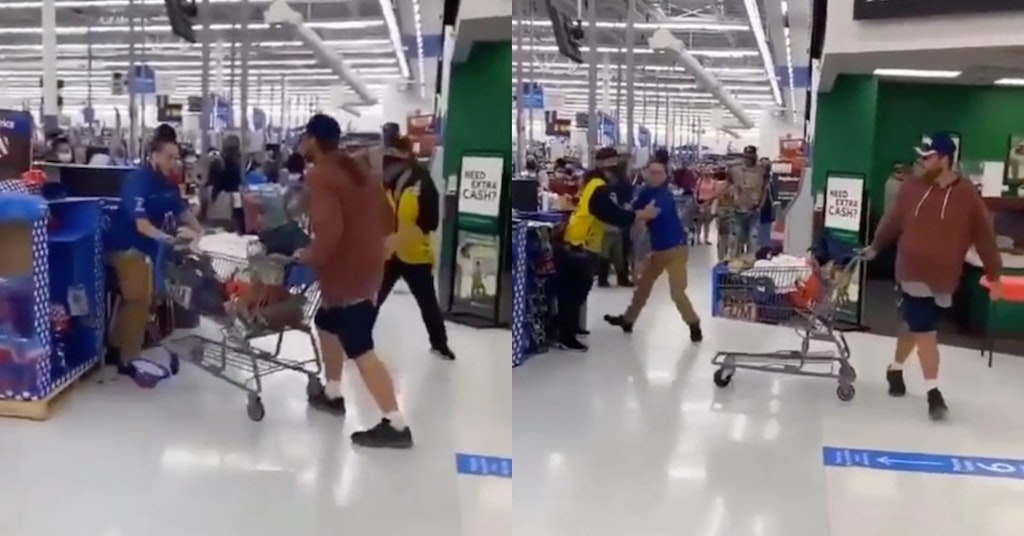 Walmart Security Worker Punches Customer Who Spit On Him

With the world reopening, not everyone remembers how to behave in public—though one could certainly make the argument that some people never knew at all.

The lack of social etiquette was on full display at a Walmart in Colorado after a customer and a security worker got into a violent spat in the middle of the store.

The circumstances that led up to the altercation are unclear, but the 19 second video starts off with the Walmart shopping rammer his cart full of merchandise into the employee, purposely pinning him against a display of some sort.

When the guy gets free, the customer spits on him, and then starts casually pulling his cart towards the exact as another employee holds the security guy back.

But that doesn’t last for long—the security guy gets free, tips over the customer’s cart, and punches him in the head, even as bystanders yell at him not to do it.

The customer doesn’t react at first, then flops over onto the floor amidst the contents of his spilled cart, apparently out cold.

The video left viewers split as to who was at fault in the situation.

Walmart spokesperson Casey Staheli told indy100 that “the man who punched the customer was a contracted, third-party security worker and not a Walmart associate,” and that “he has since been banned from working at Walmart stores.”

However, some viewers argued that the security worker was merely defending himself after the customer rammed him with a cart.

“They employee was just attacked. It was self-defense or crime of passion,” u/pokemonisok wrote.

“You can’t call self-defense if the threat to your person is over,” argued u/stacker55. “They still committed assault but if you follow them as they’re leaving and assault them, then so have you.”

It’s hard for anyone to know what to make of the situation without those crucial moments before our version of the recording begins, but one thing’s for sure—that punch looks like it hurt.