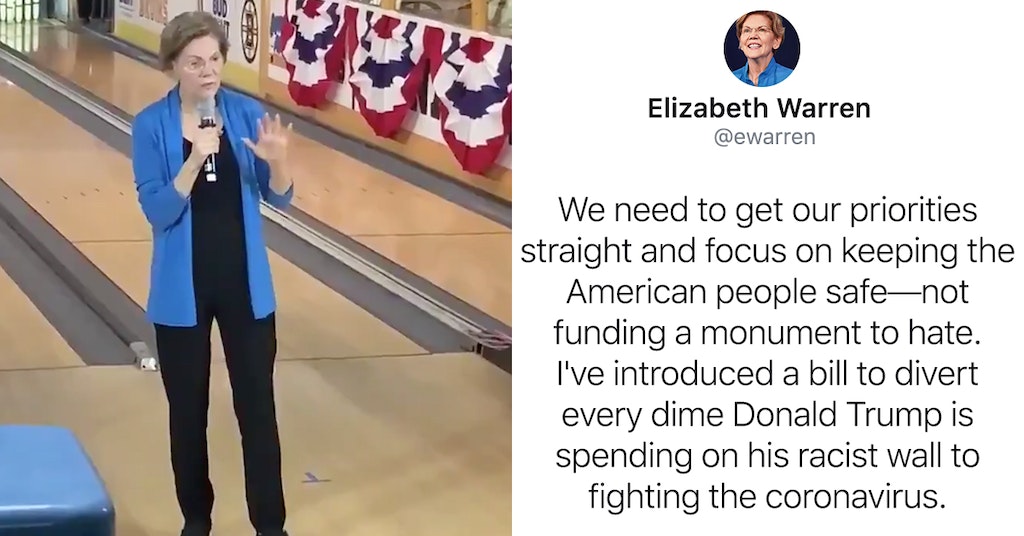 Fighting the coronavirus outbreak? Elizabeth Warren has a plan for that.

The Senator and presidential candidate introduced a bill Thursday that would redirect money President Trump has tapped for constructing a wall between the United States and Mexico and instead use it to combat the looming coronavirus outbreak in America.

“Rather than use taxpayer dollars to pay for a monument to hate and division, my bill will help ensure that the federal government has the resources it needs to adequately respond to this emergency,” Warren said of the legislation.

We need to get our priorities straight and focus on keeping the American people safe—not funding a monument to hate. I've introduced a bill to divert every dime Donald Trump is spending on his racist wall to fighting the coronavirus. https://t.co/SoilIdPetb

The White House has requested emergency funds totaling only $2.5 billion to fight the spread of the disease.

This amount has been criticized by both Democrats and Republicans as too little.

While Senate Minority Leader Charles Schumer has suggested $8.5 billion be put towards coronavirus response, Warren’s plan would actually reroute approximately $10 billion from the highly controversial border wall to the Department of Health and Human Services.

And the proposed legislation is going over well with Warren’s supporters online, who are praising her for having a concrete plan while also managing to roll her eyes at Trump’s wall.

Imagine having a president who had a full plan for the coronavirus ready a MONTH ago and who just put in a senate bill to pay for it, all while still campaigning.

I have a tiny immune compromised baby. All I really want is to be able to sleep peacefully again.

Responses by MAGATS to Warren’s bill to take useless wall money to use for Corona virus were like “duh! She wants to open borders and let all the infected people walk right in, derrrr”

Trump’s CDC flew the virus in on a plane you asshats!

Using border wall money to fight the coronavirus pandemic is considerably better idea than what Trump has proposed, which is raiding the fund that helps heat low-income homes. It's almost as if one of these people is actually trying to solve the problem. https://t.co/2z86GNGfFy

Warren first brought up her plan at CNN’s Town Hall on Wednesday, where she also criticized Trump’s decision to put Vice President Mike Pence in charge of coordinating the response to the virus.

“Do keep in mind that this vice president has dealt with a public health emergency before in Indiana,” she said, referencing Indiana’s HIV outbreak, for which Pence is largely blamed. “And what was his approach? It was to put politics over science and let a serious virus expand in his state and cost people lives.”