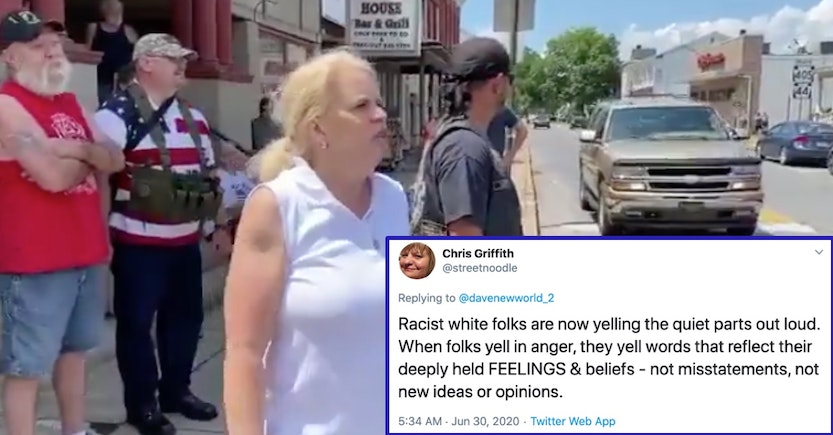 An anti-racism protest in Watsontown, Pennsylvania was met with harassment by angry counter-protestors intent on putting their racism on display over the weekend.

Police shut down traffic for three blocks after agitators began yelling at a group of around 200 protestors marching peacefully down the street.

One woman in particular was caught on video yelling at protestors that they’re “trash.”

“F**k you! We’re going to give you no peace!” she screamed across the street, as protestors chanted the familiar refrain of “no justice, no peace.”

“You live off of white people!” she added. “You f**king communists. F**k off! Keep your HIV over there.”

Off-screen protestors can be heard responding “We love you” on several occasions, which only seemed to anger the woman further.

Her white supremacy was really shining through, and commenters online called it out without holding back.

And they also pointed out how useless her attempts at insults were.

But this woman wasn’t the only counter-protestor vocally opposing Black Lives Matter.

According to The Daily Item, another counter-protestor was yelling out “White lives matter!” and “Keep walking!” at those marching to protest racism.

Another woman was recorded screaming “Democrats started the KKK!” as her young son stood next to her yelling out “All lives matter!”

“Hate is being taught in this area,” said protest organizer K.J. Williams. “What we have to do is teach that that is not right.”

As loud and angry as some of these racist counter-protestors were, anti-racism protestors still outnumbered them, a sign to some Pennsylvanians that the change they’ve been fighting for isn’t out of reach.