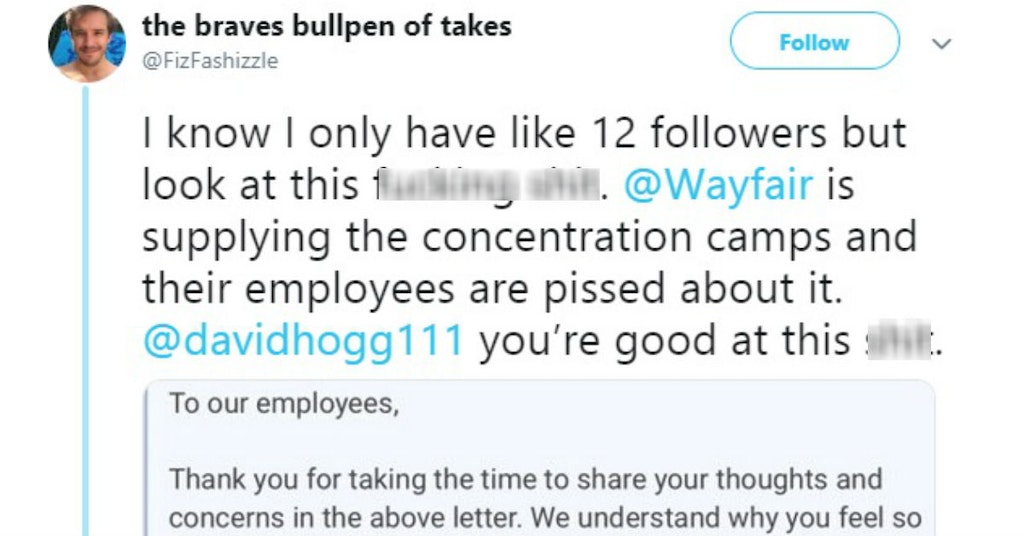 Wayfair, a multi-billion dollar online home goods store, has responded to a demand from their employees to stop supplying the growing concentration camps at our Southern border with a solid and resounding “nah.”

A Twitter user of the name “@FizFashizzle,” while acknowledging that he only has “like 12 followers,” published the response letter from Wayfair to a letter they received signed by many of their lower-level employees to please stop participating in human rights atrocities.

Wayfair’s answer is basically that as long as no laws are technically being broken, they’ll take money from whoever.

I know I only have like 12 followers but look at this fucking shit. @Wayfair is supplying the concentration camps and their employees are pissed about it. @davidhogg111 you’re good at this shit. pic.twitter.com/zaed6gSVe6

“We are proud to have such an engaged team that is focused on impacting our world in meaningful and important ways,” Wayfair’s letter reads. “We support the rights of all individuals to engage in their communities and drive change on the topics and issues they care about.”

“As business leaders, we also believe in the importance of respecting diversity of thought within our organization and across our customer base. No matter how strongly any one of us feels about an issue, it is important to keep in mind that not all employees or customers agree.”

Oh, okay. So as long as the customer, who is making money by running a concentration camp, thinks concentration camps are fine, then it’s fine to supply them with furniture! Because diversity. What a convenient thought loophole.

“As a retailer, it is standard practice to fulfill orders for all customers and we believe it is our business to sell to any customer who is acting within the laws of the countries within which we operate,” the letter continues. Fantastic, because we all know that as long as it’s legal, it’s morally right. It’s also apparently legal to condescend to your employees by reminding them that they are a retailer, and that retailers sell things.

Thankfully, another Twitter hero posted the original letter from Wayfair employees to “leadership” so that we can all see how unreasonable it is.

It’s literally just “stop selling to concentration camps and create a code of ethics so we don’t have to write up another letter like this in the future.” They even provided handy links so that Wayfair “leadership” could easily read about the atrocities being committed by the concentration camp companies Wayfair wants to profit from.

Wayfair employees are now planning a company-wide walkout to protest this weak response to their demands. Fiz has already created a #WayfairWalkout Twitter account to spread the news.

Well, Twitter, what do we think of Wayfair’s response?

Absolutely, @Wayfair, where's the harm in a company selling "to any customer who is acting within the laws of the countries in which they operate"? pic.twitter.com/ymPJVhYgc9

Thanks for the info! Amplifying now.

I’m disgusted that any company’s leadership would take an order to supply beds for children mistreated by @DHSgov and then attempt to justify taking such an order to their appalled and concerned employees. #BoycottWayfair

Subsidiaries
Wayfair owns and operations a number of subsidiaries in both North America and Europe.]

Down with all of them.

Never used them; now never will

Ha, I was talking w/a @Wayfair recruiter. Putting the kibosh on that real quick.

The “diversity of thought” line. Christ. That’s the same shit 20-year-old basement redditors drop to complain about twitter “censorship” or say things like “actually Charlottesville was about illegal immigration” and “the kids’ parents are to blame if they die in our camps.”

End this immediately @Wayfair. I will purchase nothing from your site until you do.

This is such a horseshit response from @wayfair, noted concentration camp furnisher https://t.co/UJGOBsBQDv

Disappointed but not surprised. Tempted to have kids just so my offspring can read about @wayfair in history books. Yikes. https://t.co/DYQj6AeGMa

Good to know @Wayfair’s leadership is as flimsy and spineless as their fucking furniture! @wayfairwalkout https://t.co/qOGXgp86dw

Oh look my multi-thousand-pound @Wayfair wishlist just got set on fire the week before I was about to stock up https://t.co/2vp8TeqL2J

Nice ethics, @wayfair, and so smart to hide behind the 'it's legal' argument when it isn't even that. I support the #wayfairwalkout. https://t.co/gDaN5g58kv

David Hogg is definitely going to hear about this.