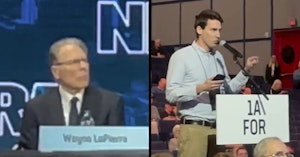 The National Rifle Association holding an annual convention in Texas just days after a shooting in the state left 19 young children and two teachers dead was controversial, to say the least. Proponents of gun control in particular felt that celebrating these killing machines when the United States continues to have more mass shootings than days in the year was the wrong move.

But comedian Jason Selvig decided to use it as an opportunity to speak up in the way that his duo, The Good Liars, so frequently do.

Addressing NRA Chief Executive Wayne LaPierre directly, Selvig took the mic during the convention and to

Selvig then took the opportunity to recount a long stream of shootings where people turned around and blamed LaPierre and the NRA for the extensive loss of life before continuing, “You kept hearing that Wayne LaPierre isn’t doing enough, and frankly, that’s not true.”

Selvig’s “praise,” of course, underscores the repeated decision from the NRA and rightwing politicians to reiterate their talking points in the wake of a mass shooting and do literally nothing else, time and time again.

But some viewers also pointed out that the delusion that “thoughts and prayers” are the best that can be done runs so strong among the evangelical crowd that if we didn’t know who Selvig was, it would be near impossible to tell if his comments were serious or not.

And until mere “thoughts and prayers” stop being the only response to mass shootings — besides the call to arm teachers and turn schools into practice prisons, anyway — we’ll just start the cycle all over again.